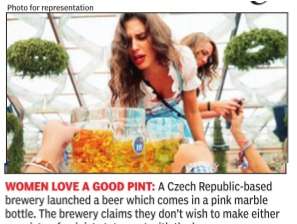 Feminism is making progress, people. In 2017, wom en have the right to work, vote, eat Yorkie bars and now it seems we can even drink beer.Aurosa, a Czech Republic-based brewery , has launched “Beer For Her“, a premium lifestyle beer which comes in a pink marble bottle. Martina Smirova, the brand's founder, claims the beer is a “representation of a woman's strength and a girl's tenderness“.
The website adds: “ Aurosa was born to prove that women can succeed anywhere without having to adapt and sacrifice their natural femininity“.
With the brand being made available in London last week at just over £8 a bottle (approx. Rs 700, a bottle of Heineken costs £2), social media users have been quick to call out the brand for its fundamentally sexist branding. Aurosa were quick to defend themselves, posting on their Facebook page: “ Aurosa was never intended to take part in sexism, feminism or the like... We are simply abrand that wants to offer beer in an elegant and beautiful bottle, something that has not been done before, for those women who want it and who's (sic) lifestyle we fit.“ Perhaps the most baffling aspect of #BeerForHer though, is Aurosa's genuine promotion of it as an empowering product, with limited edition bottles being sold in “Woman Power“ tote bags. To top it off, their social platforms are littered with “pro-women“ memes, including the bizarre: “ A well read woman is a dangerous creature“.


Posted by DEVAPRIYA
Email ThisBlogThis!Share to TwitterShare to FacebookShare to Pinterest