﻿
﻿
US President Trump accused China of doing nothing on North Korea and said he was “very disappointed“ with Beijing, a day after Pyongyang tested an intercontinental ballistic missile (ICBM) that could reach the US mainland. Trump also said he would no longer allow North Korea to continue with its belligerent behaviour.“I am very disappointed in China. Our foolish past leaders have allowed them to make hundreds of billions of dollars a year in trade, yet they do NOTHING for us with North Korea, just talk,“ Trump said on Saturday . “We will no longer allow this to continue. China could easily solve this problem!“ he said, expressing his disappointment over Chinese inaction while North Korea continues with its ballistic missile tests.
North Korea said its latest ICBM test was a “warning“ targeting the US for its efforts to slap new sanctions on Pyongyang and threatened a counter-strike if provoked militarily by Washington. The North's first ICBM test set off global alarm over the country's weapons capabilities and a push by the US to impose more UN and bilateral sanctions, with the US Senate passing new bipartisan curbs on Pyongyang on Friday .
But the US-led campaign only provided “further justification“ for the North's resolve to maintain its weapons programmes, Pyongyang's foreign ministry said. “The...test-fire of ICBM... is meant to send a stern warning to the US making senseless remarks, being lost to reason in frantic sanctions and pressure campaign against the DPRK,“ it said, referring to North's official name. 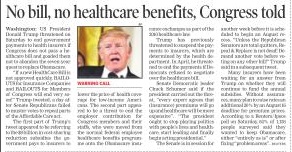 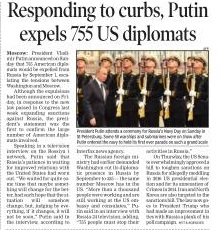