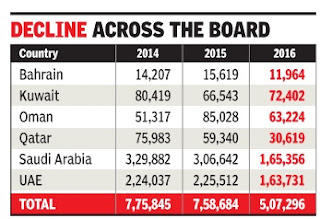 The number of Indian workers emigrating to the Gulf for work has dropped in the past couple of years, possibly due to slowing economies of GCC nations hit by weaker oil prices. The decline has been significant between 2014 and 2016.According to official figures, the number of Indian workers emigrating to the GCC countries was 7,75,845 in 2014 and fell to 5,07,296 in 2016. Though disruptions due to the Islamic State were largely in Iraq-Syria, the instability af fected perceptions about the region as a whole.
The reduced flow of Indian workers to the Gulf is seen to have impacted remittances from these countries. While the breakup is not available, overall remittances as recorded in India's balance of payments statistics fell slightly from $69,819 million in 2014-15 to $65,592 million in 2015-16.
In terms of number of Indians emigrating, Saudi Arabia showed a sharp decline from 3,29,882 in 2014 to 1,65,356 in 2016, almost a 50% drop. Part of this is attributable to Saudi's slowing economy due to low oil prices. But for the past few ye ars, Saudi Arabia has been following what the Indian government calls a `Saudiisation' policy, which is aimed at employing more Saudi nationals rather than foreigners.
“This is to encourage the private sector to employ greater number of Saudi nationals as well as to reducing reliance on expatriate workers.Further, against the backdrop of declining oil prices, the Saudi government has introduced a number of new taxes VAT so as to augment the sources of government revenue,“ the foreign ministry told Parliament this week.
Given that there are around three million Indians in Saudi Arabia, this is expected to have an impact on Indian families in that country , forcing many to return. One of these is the de pendant tax, which started on July 1, reported by TOI earlier. According to the MEA, this is not India-specific, “The tax rate is SR 100 (Rs 1,700 approximately) per month on each dependant from the year 2017 onwards. The dependent tax will be increased to SR 200 in 2018, SR 300 in 2019 and SR 400 in 2020 per dependent member of the expatriate family ,“ the government said.
Given that there are around 3 million Indians in Saudi Arabia, this is expected to have an impact on Indian families in that country , forcing many to return.
For the time being, official figures do not show any noticeable impact on Indians there. The MEA told Parliament that “the resident Indian community in Saudi Arabia has marginally increased during the last one year and is presently estimated at 3.03 million in March 2017“. Indi an officials had raised this issue with a visiting Saudi delegation on July 11, the MEA told the House.
The figures for Qatar and the UAE show sharp reductions in Indians emigrating to these countries. In Qatar, it came down from 75,983 in 2014 to 30,619 in 2016 while in the UAE, it dipped from 224,037 to 163,731 between the two years.Kuwait showed a marginal decline from 80,419 to 72,402.Oman is the only Gulf country which showed an uptick from 51,317 in 2014 to 85,028 in 2015 before slightly dipping to 63,224 in 2016.
In Bahrain, where Indians outnumber locals, the numbers reduced from 14,207 in 2014 to 11,964 in 2016.
Examples of Indian workers left in the lurch have come from GCC countries which required official intervention from the Indian government.
There have been instances of mistreatment of Indian workers, particularly in these countries which could have added to the slowdown.