Wreckage On Mont Blanc Could Be From One Of Two AI Planes; Second Carried Father Of India's A-Bomb

Body parts that could belong to passengers killed in either of two Air India plane crashes more than 50 years ago have been found on Mont Blanc in the French Alps. One of them had Homi Bhabha, the father of the Indian nuclear programme, on board.Daniel Roche, a climber who is fascinated by air plane accidents and has spent years combing the Bossons Glacier in the Alps looking for remains, made the discovery on Thursday . “I had never found any significant human remains before,“ he told AFP. This time however he found a hand and the upper part of a leg. Two major accidents have taken place at the site with over 150 people killed in total. 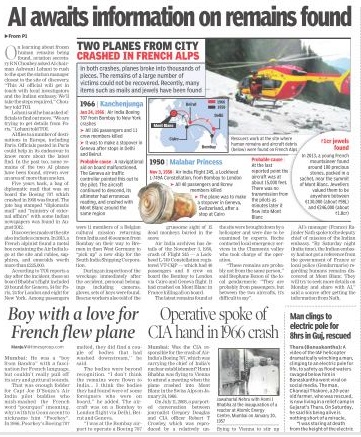 On January 24, 1966, an Air India Boeing 707 from Bombay to New York crashed near Mont Blanc's summit, killing all 117 people on board.Bhabha, a physicist and chairman of the Atomic Energy Commission, was travelling to Vienna for a conference. The circumstances of his death were seen as mysterious and caused speculation since he had spearheaded the establishment of India's first atomic energy facility at Trombay , giving it a strategic advantage.

The aircraft named Kanchenjunga had made two designated stops, at Delhi and Beirut, and was due for a third in Geneva. The pilot was instructed to descend for Geneva's Cointrin airport upon passing Mont Blanc. It was believed an apparent defect in radio navigation made the captain wrongly assume that he had passed over the mountain; he began his descent and in a snow storm flew straight into the Mont Blanc massif. Another Air India flight, a Lockheed Constellation named `Malabar Princess' had crashed on the mountain in November 1950, killing 48 people. 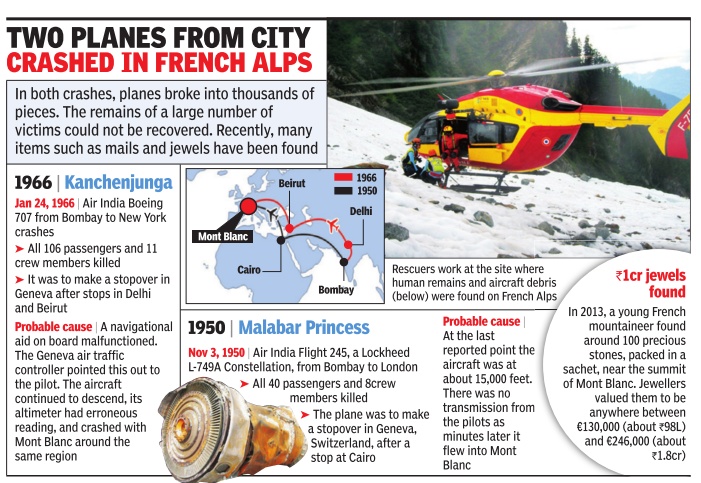 Roche said the remains he had found could be of a female passenger from the 1966 Boeing 707 flight, as he has also discovered one of the plane's four jet engines. On learning about frozen human remains being found, aviation secreta ry R N Choubey asked AI chairman Ashwani Lohani to rush to the spot the station manager closest to the site of discovery .“This AI official will get in touch with local investigators and the Indian embassy . We'll take the steps required,“ Choubey told TOI.
Lohani said he has asked officials to find out more. “We are trying to get details from Paris,“ Lohani told TOI.
AI flies to a number of destinations in Europe, including Paris. Officials posted in Paris could help in its endeavour to know more about the latest find. In the past too, some remains of the two AI planes have been found, strewn over an area of more than one km.
Five years back, a bag of diplomatic mail that was on board the Boeing 707 which crashed in 1966 was found. The jute bag stamped “diplomatic mail“ and “ministry of external affairs“ with some Indian newspapers was found in August 2012.
Discoveries made at the site also include a camera. In 2013, a French alpinist found a metal box containing the Air India logo at the site and rubies, sapphires, and emeralds worth more than £225,000.
According to TOI reports a day after the incident, those on board Bhabha's flight included 20 bound for Geneva, 54 for Paris, 24 for London and eight for New York. Among passengers were 11 members of a Belgian cultural mission returning from India and 46 seamen from Bombay on their way to Bremen in then West Germany to “pick up“ a new ship for the South India Shipping Corporation.

During an inspection of the wreckage immediately after the accident, personal belongings including cameras, gloves, sets of keys were found.Rescue workers also told of the gruesome sight of 15 dead monkeys buried in the snow.
Air India archives has details of the November 3, 1950, crash of Flight 245 -a Lockheed L-749 Constellation registered VT-CQP -which had 40 passengers and 8 crew on board the Bombay to London via Cairo and Geneva flight. It had crashed on Mont Blanc in France killing all on board.
The latest remains found at the site were brought down by a helicopter and were due to be examined by experts. Roche contacted local emergency services in the Chamonix valley who took charge of the operation. 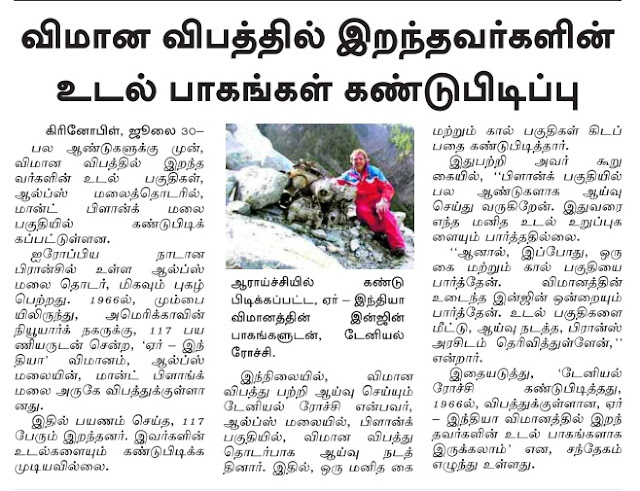 “These remains are probably not from the same person,“ said Stephane Bozon of the local gendarmerie. “They are probably from passengers, but between the two aircrafts, it's difficult to say“. AI's manager (France) Rajinder Nath spoke to the deputy chief of mission of the Indian embassy . “By Saturday night (India time), the Indian embassy had not got a reference from the government of France or local police (Gendarmarie) regarding humans remains discovered at Mont Blanc. They will try to seek more details on Monday and share with AI,“ said a source after getting the information from Nath.
Posted by DEVAPRIYA
Email ThisBlogThis!Share to TwitterShare to FacebookShare to Pinterest