CONVERT OR DIE - Exodus of Kashmiri Pandits: What happened on January 19, 26 years ago?

Exodus of Kashmiri Pandits: What happened on January 19, 26 years ago?

26 years ago on this day, Kashmiri Pandits had witnessed a hysteric, macabre night in the form of blaring threats and slogans, asking them to flee their homeland, convert or die. 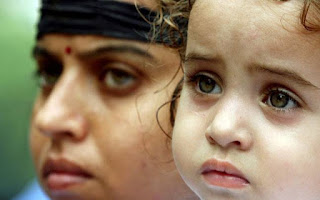 http://indiatoday.intoday.in/story/exodus-of-kashmiri-pandits-january-19-jammu-and-kashmir/1/574071.html
IndiaToday.in | Edited by Shreya Biswas
The cold, dark night of January 19, 1990, had stirred into life the worst nightmares of Kashmiri Pandits living in the valley. Screaming from loud speakers and crowded streets was a message for the Sikhs and Hindus living in Kashmir -
The threats had been coming in for a long time, but the night of January 19 is said to have seen a demented assault of a different level. Even 26 years later, Kashmiri Pandits shiver remembering the night that forced them into exodus. 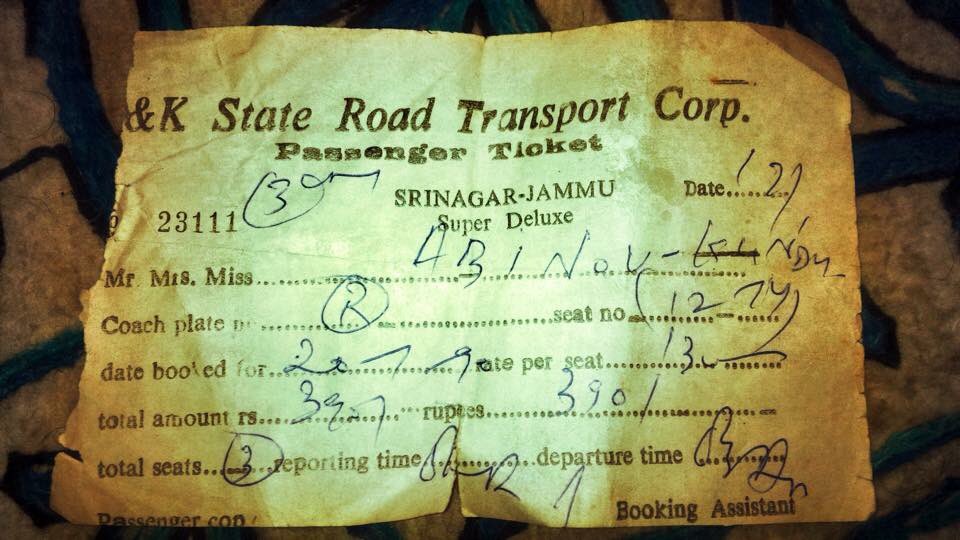 Aditya Raj Kaul
✔@AdityaRajKaul
Ticket to exile: Bus ticket purchased by family on 19th Jan., 1990 when we were forced out of Kashmir. #KPExodusDay

Twitter Ads info and privacy
Several authors have penned down accounts and personal experiences of the exodus over the years. What remains common in these descriptions is the fright that gripped this particular night.

Here's an excerpt of Col Tej Kumar Tikoo's book, Kashmir: Its Aborigines and Their Exodus, describing the fateful night:View image on Twitter

Aditya Raj Kaul
✔@AdityaRajKaul
Ticket to exile: Bus ticket purchased by family on 19th Jan., 1990 when we were forced out of Kashmir. #KPExodusDay

Twitter Ads info and privacy
Several authors have penned down accounts and personal experiences of the exodus over the years. What remains common in these descriptions is the fright that gripped this particular night.

Here's an excerpt of Col Tej Kumar Tikoo's book, Kashmir: Its Aborigines and Their Exodus, describing the fateful night: 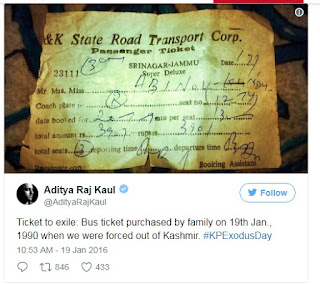 "As the night fell, the microscopic community became panic-stricken when the Valley began reverberating with the war-cries of Islamists, who had stage-managed the whole event with great care; choosing its timing and the slogans to be used. A host of highly provocative, communal and threatening slogans, interspersed with martial songs, incited the Muslims to come out on the streets and break the chains of 'slavery'. These exhortations urged the faithful to give a final push to the Kafir in order to ring in the true Islamic order. These slogans were mixed with precise and unambiguous threats to Pandits.They were presented with three choices - Ralive, Tsaliv ya Galive (convert to Islam, leave the place or perish). Tens of thousands of Kashmiri Muslims poured into the streets of the Valley, shouting  'death to India' and death to Kafirs...
... The Pandits could see the writing on the wall. If they were lucky enough to see the night through, they would have to vacate the place before they met the same fate as Tikka Lal Taploo and many others. The Seventh Exodus was surely staring them in the face. By morning, it became apparent to Pandits that Kashmiri Muslims had decided to throw them out from the Valley. Broadcasting vicious Jehadi sermons and revolutionary songs, interspersed with blood curdling shouts and shrieks, threatening Kashmiri Pandits with dire consequences, became a routine 'Mantra' of the Muslims of the Valley, to force them to flee from Kashmir..."

Twitter Ads info and privacy
Different accounts give different statistics of the total number of Kashmiri Pandits who fled their homes for their life in the 1990s. While some say around 1,00,000 of them had left the valley, others suggest figures as high as 1,50,000 to 1,90,000.
A report by the Jammu and Kashmir government says as many as 219 people from this community were killed in the region between 1989 and 2004.
In his book, Our Moon Has Blood Clots, author and journalist Rahul Pandita gives a timeline of the events that brought about the exodus. In this, Pandita writes about the murder of political activist Tika Lal Taploo in September 1989 and goes on list many more horrid memories.

Here's an excerpt of this timeline:

'September 1989
Pandit political activist, Tika Lal Taploo is shot dead by armed men outside his residence.
January 1990
Massive crowds assemble in mosques across valley, shouting anti-india, anti-pandit slogans. The exodus of Kashmiri Pandits begins. In the next few months, hundreds of innocent Pandits are tortured, killed and raped. By the year-end, about 350,000 Pandits have escaped from the Valley and taken refuge in Jammy and elsewhere. Only a handful of them stay back.
March 1997
Terrorists drag out seven Kashmiri Pandits from their houses in Sangrampora village and gun them down.
January 1998
23 Kashmiri Pandits, including women and children, shot in cold blood in Wandhama Village.
March 2003
24 Kashmiri Pandits, including infants, brutally shot dead in Nadimarg Village.
2012
Thousands of Pandits still languish in refugee settlements of 8 x 8. After more than two decades, the Kashmiri Pandit community has still not been able to return to their ancestral land. They are dispersed all over from Jammu to Johannesburg."
India has seen several changes ever since that fateful night in 1990. New governments have come and gone, multiple developments have come forth nationwide, but scores of Kashmiri Pandits who were chased out of their homes have still not been able to find a way back.
Posted by DEVAPRIYA
Email ThisBlogThis!Share to TwitterShare to FacebookShare to Pinterest