Ch Sushil Rao| TNN | Updated: May 28, 2017,
HIGHLIGHTS
23-year-old Saira Banu was smuggled to Saudi Arabia via Muscat and Dubai.
The woman was allegedly sold to a sheikh in Saudi Arabia by her husband

HYDERABAD: A 23-year-old woman from Shah Ali Banda in old city has been given triple talaq over phone after she was allegedly sold to a sheikh in Saudi Arabia by her husband. The victim is said to be Saira Banu.
he mother of the victim, Banu Begum, said her son-in-law had divorced her daughter after he got her trafficked to Riyadh and that he had sent her there only with the intention of divorcing her. 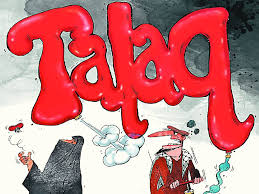 Saira Banu was smuggled to Saudi Arabia via Muscat and Dubai. She landed there on May 2.

Her husband reportedly had contacted some agents in the Old City dealing in trafficking people to the Gulf. The agent sent her on a one-month visa to Dubai. "My son-in-law has sold my daughter and divorced her," Banu Begum said in a video appeal to Union external affairs minister Sushma Swaraj on Saturday. She also filed a complaint with the Shah Ali Banda police station to take action against her son-in-law.

Stay updated on the go with Times of India News App. Click here to download it for your device.
Posted by DEVAPRIYA
Email ThisBlogThis!Share to TwitterShare to FacebookShare to Pinterest