Jul 22 2017 : The Times of India (Chennai)
16 UK schoolchildren set to work with NGO sent back from Chennai airport 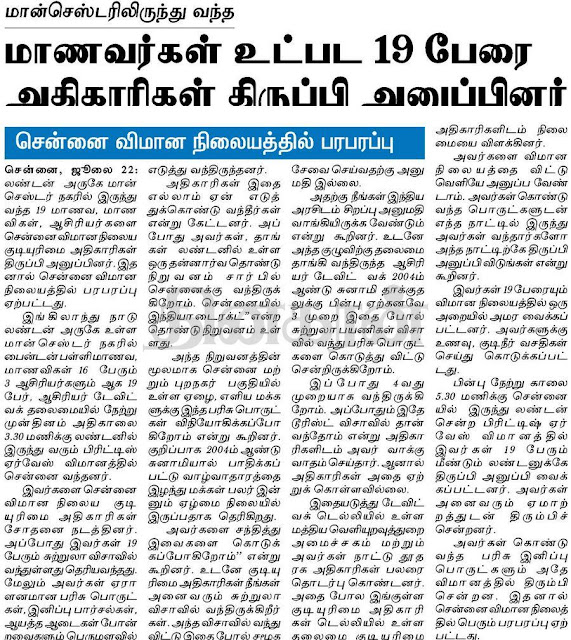 Immigration officials at Chennai airport sent back to the UK 19 British nationals, including 16 students, who had arrived in the city to take part in a charity event at a children's home, because the visas they held did not allow them to work with an NGO in the city .The team, consisting of 16 students and three staff members of Poynton High School, Manchester, flew into Chennai on Monday with crates of material for distribution to NGO India Direct-supported children's homes in the city .
Immigration officials, following strict protocol, made the Poynton High students and staff members take the first possible flight back to the UK -which meant that they had to wait for 11 hours before they could board an aircraft to return home.The officials questioned a teacher (one of the three staff members who accompanied the children) for no less than two-and-ahalf hours.
When contacted the immigration officials concerned refused to provide details such as what visas the team members held or elaborate on any aspect of their returning the team to Britain.
India Direct, however, told TOI that every member of the team had a valid tourist visa. “Our itinerary included a day each at a children's home,“ a representative of the NGO said. “The students planned to interact and play with the children at the homes and get involved with them in craftwork, painting and making masks.“ “We were to take a doctor with us and go to a village without any medical facilities,“ he said. “While the students interacted with the children, their parents and relatives would have been able to consult the doctor.“ “The eligibility criteria for the visas do not preclude these activities,“ he said. “The team does not feel that this equates to working for or volunteering with an NGO.“ Earlier, on its Facebook page, India Direct said: “On Mon day , July 17, 2017, 16 students and three staff members flew to Chennai, India, to once again visit and support this great charity. However, they were turned back at immigration and refused entry into the country .Chennai airport immigration officials claimed that the group had no rights to enter the country on their visa because they were going to be undertaking work with a non-governmental organisation.“
“In reality, the students were going to visit children's homes for which they have helped raise thousands of pounds, and to experience the rich, diverse and exciting culture of the region,“ the Facebook post said.
The BBC reported the incident, quoting Poynton High School head teacher David Waugh as saying: “They were going to play with the children they have helped and paint a mural. The staff and students are in a state of tired shock having travelled for 48 hours.“