Pakistan's embattled Prime Minister Nawaz Sharif has admitted before the Supreme Court, hearing a money laundering case against him, that he had obtained a permit to work in a company in the UAE while rejecting the allegation that he had concealed his employment.In a written reply submitted in the SC on Saturday through his counsels -Khawaja Haris, Amjad Pervaiz and Saad Hashmi -Sharif said his employment with the Capital FZE and obtaining of work permit for it had been mentioned in his nomination papers during the 2013 general election.
A JIT constituted by the SC to probe the offshore business dealings of the Sharif family in 1990s in its report said the PM was the head of Capital FZE and he had also obtained a work permit from the UAE government.The PM's lawyers had initially denied Sharif was the head of any offshore firm.
Sharif told the SC that his son, Hassan Nawaz, was the “owner, director & secretary and the authorised signatory of the Capital FZE“. 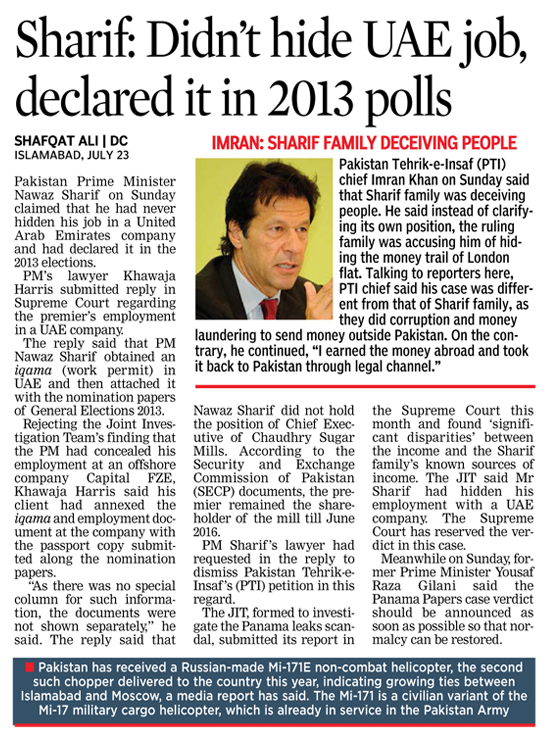 The premier was only a “ceremonial office holder“ in 2007 when he was in exile and had nothing to do with the running of the company, it said. “The Iqama (work permit) and the PM's employment with the Capital FZE is reflected in the copies of his passport annexed with the nomination forms submitted to the ECP before 2013 election. Being no separate column in the nomination forms for any such information to be provided by the candidate contesting the election Nawaz Sharif 's passport copies were annexed.“
The JIT has recommended that the report's Volume-X should be treated as confidential as it contained details of correspondence with other countries.
Posted by DEVAPRIYA
Email ThisBlogThis!Share to TwitterShare to FacebookShare to Pinterest