staying single is good for you

Not Being Married Can Have Benefits Like Stronger Social Networks, A Healthier Body 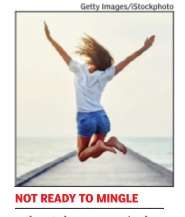 Bella DePaulo is 63 years old and she's been single her entire life.“I never wanted to get married. Living single was my happily ever after,“ DePaulo, a psychologist at the University of California Santa Barbara and a pioneer for the single life, said at a TEDx Talk this spring.
DePaulo has studied singles like herself for more than a decade, and her findings suggest that being single has a range of benefits, from the psychological to the physical.
“The beliefs that single people are miserable, lonely , and loveless, and want nothing mo re than to become unsingle are just myths,“ DePaulo wrote on the blog PsychCentral in 2013.
In 2016, she combed through more than 800 studies of single and married people and found that her own work isn't the only research to suggest that being single could have some tangible health benefits -from stronger social networks to a healthier body .
Among the advantages of singledom, singles have a stronger social network than their married counterparts.
In 2015, social scientists Natalia Sarkisian and Naomi Gerstel set out to explore how ties to relatives, neighbours, and friends varied among single and married American adults. They found that singles were not only more likely to frequently reach out to their social networks, but also tended to provide and receive help from these people than their married peers.
Put simply , “being single increases the social connections of both women and men,“ Sarkisian and Gerstel wrote in their paper.
Singles may be more physically fit. There may be some truth to the idea that people who “settle down“ ease into unhealthier habits, at least when it comes to some measures of physical fitness.
After surveying more than 13,000 men and women between ages 18 and 64, researchers found that those who were single and had never been married worked out more frequently each week compared with their married or divorced peers.
And a 2015 study in the journal Social Science and Medicine that compared body mass indexes for about 4,500 people across nine European countries found that single men and women had slightly lower BMIs, on average, than men and women who were married. Overall, the married couples also weighed about five more pounds, on average, than the singles.
Single people could be more likely to develop as indivi duals. The National Survey of Families and Households that compared over 1,000 people who had always been single with around 3,000 people who had been continuously married in 1998, found that the singles in the sample were more likely to experience personal growth than the married ones.
Single people may embrace alone time -and benefit from it -more than married people. According to psychotherapist Amy Morin, solitude can have a range of benefits for your mental health.
It may also help you be more productive and more creative.