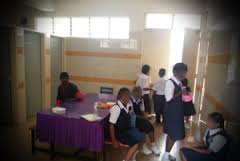 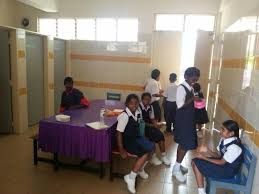 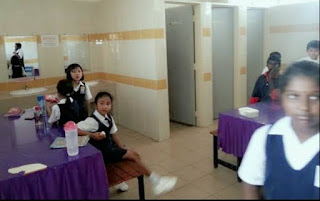 G Lavendran
| July 23, 2013
http://www.freemalaysiatoday.com/category/nation/2013/07/23/students-forced-to-take-meals-in-toilet-area/
A primary school in Sungai Buloh cordons off its canteen area with red plastic tape, forcing its non Muslim students to have their meals in the school's shower room

PETALING JAYA: The Sekolah Kebangsaan Seri Pristana in Sungai Buloh has come under fire from netizens after a parent posted photos on Facebook of non-Muslim students having their meals in the school’s shower area, next door to the toilets.


It shows students eating food on makeshift tables and benches placed in the shower area, ostensibly a decision made by school because of the fasting month of Ramadan.
Angry netizens poured scorn on the school management for their decision to discriminate against the non-Muslim children by forcing them to have their meals in the shower area during recess.
One Facebook user, Harris Nasril, said that it was ridiculous for the school management to make non-Muslim children to eat in a shower room space next to the toilets as if there were no other rooms available.
“This school is nonsense. As a Muslim, I’m sorry to hear this. Islam never teaches this kind of thing. The headmaster can use any other room, even the library, This is totally unacceptable,” he said.
Another Facebook user, Emy Deen also commented saying that other races do not have to be treated this way just so that the Muslims can fast for Ramadan.
“I’m a Malay and a Muslim. Certainly I don’t agree with this kind of treatment of another race, this is not the teaching of Islam.
“I hope those who are involved in this will be punished accordingly,” she said.
MIC president G Palanivel, via his Facebook posting, meanwhile urged the authorities to take action against those responsible for the matter.
“It is totally unacceptable where a primary school has asked it’s non-Muslim students to have their meals in the toilet. Drastic action has to be taken against those responsible for the inhumane act,” said Natural Resources and Environment minister.
Police report lodged
Chairman of the National Indian-Rights Action Team (NIAT) Thasleem Mohd Ibrahim told FMT that he will be writing a letter to the school immediately to demand an explanation.
“This is really shocking. We tried to call the school but their phone line is engaged. I will be writing to them officially and will also visit the school tomorrow.
“If this is true, the school will have to apologise to the affected students and their parents. This is really absurd,” he added.
A police report has also been lodged in Perak by an angry netizen against the school management and its principal.
Former MIC secretary general S Murugesan also expressed disgust on the school’s action.
“How can they treat our children this way? Are there no other places to give them so they could have a decent meal at school?” he asked.
“Teachers are people who we entrust our children with. The Education Ministry should take stern action on both the school management and principal,” he added.
‘Take severe action’
MIC’s strategic director S Vell Paari also expressed disgust with the way the school was treating its non-Muslim students.
“This is ridiculous! Is this what the children of non-Muslims have been reduced to? Having to hide in washrooms to eat!” he said in a statement.
Lambasting the school authorities for the idiotic behaviour, Vell Paari also expressed disappointment that tax money was being used to pay the salaries of these civil servants.
“Our tax money is used to pay the salaries of the civil service, and if this is the kind of people we get, then we might as well stop paying
“If the ministry fails to take stern action, then I suggest that non-Muslims stop paying taxes,” he added.
“The action taken should not simply be a slap on the wrist, such as transferring the teacher or teachers responsible,” he said.
Deputy Education Minister P Kamalanathan, meanwhile, said that his ministry will not stay mum on this issue and will take immediate action.
In a Twitter message, Kamalanathan said the school has been instructed to change the location of the eating room.  He added that the school’s canteen was under renovation.
Education Minister Muhyiddin Yassin meanwhile has been reported as saying that the matter would be investigated.