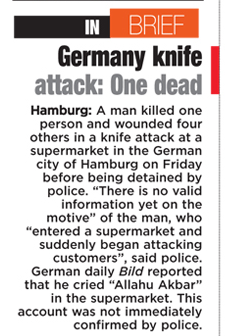 A man wielding a large kitchen knife stormed into a supermarket in the German city of Hamburg on Friday , killing one person and wounding four others before being detained by police.“There is no valid information yet on the motive“ of the man, who “entered a supermarket and suddenly began attacking customers,“ said police.
German daily Bild published a picture of the attacker in the back of a police car with a white, bloodsoaked bag over his head, and reported that he cried “Allahu Akbar“ (God is Greatest) in the supermarket.
A female witness stan ding in line at the supermarket till also told NTV rolling news channel that “as he was running out... he held up his arms and shouted `Allahu Akhbar'.“
She said she was “afraid of dying,“ as she was “queu ing for the till and couldn't get away .“ A police spokeswoman said the “Allahu Akhbar“ accounts could not be confirmed.
The suspect, who has not yet been identified, fled the supermarket after the attack. But witnesses gave chase and overpowered the man, who was slightly injured.
“It was definitely a sole attacker. The first reports about a possible motive of a robbery have not been confirmed,“ Hamburg police said in a Twitter post.
There was no information immediately available about the dead person. Police said that one of the four injured was in a serious condition.
Posted by DEVAPRIYA
Email ThisBlogThis!Share to TwitterShare to FacebookShare to Pinterest