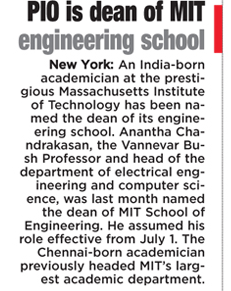 An India-born academician at the Massachusetts Institute of Technology has been named as the dean of its engineering school. Anantha Chandrakasan, head of the department of electrical engineering and computer science was last month named the dean of the MIT's School of Engineering.The Chennai-born academician had previously headed the MIT's largest academic department, spearheading a number of initiatives that opened opportunities for students, postdocs, and faculty to conduct research, explore entrepreneurial projects.
Since joining the MIT in 1994, Chandrakasan has produced a significant body of research focused largely on making electronic circuits more energy efficient.