PUTIN - NOT Planning to be Russian president after 2024 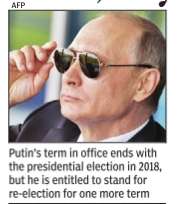 ﻿
﻿
Vladimir Putin has said he could stay on as pre sident of Russia for at least another six years.Putin's term in office ends with the presidential election in March 2018 but he is expected to seek re-election and win another six-year term.Putin has been president since 2000, apart from a stint as PM between 2008 and 2012.
He was speaking during a session with Russian children at a school in Sochi, in which he answered a series of light-hearted questions.Responding to a question about his plans on leaving office, he smiled and said: “But I haven't decided yet if I will leave the presidency .“
However, he pledged not to change the Russian constitution to allow him to stay as president indefinitely . “I had an opportunity , I was even asked to change the constitution at one time,“ he said. “I did not do it, and I don't intend to do it in the future.“
The rules allow a president to serve for no more than two terms in a row. Putin's spell as PM means he is currently nearing the end of the first term as president and is therefore entitled to stand for re-election for one more term. “I like chatting with my friends, reading historical books, listening to music and doing sport,“ he replied when asked what he enjoyed doing in his spare time.
He said he rarely used the internet but drew a comparison between people who use fake identities online and the personas he adopted when he worked for the KGB intelligence agency .
Asked for his thoughts on feminism, Putin said he saw nothing wrong with the feminist movement and recognised the existence of a gender pay gap in Russia. However, he said a similar problem existed in the West and that sexism was not as bad in Russia as in many Muslim countries. Asked what his three most important values are, the Russian president replied: “Love, freedom and life itself “.
Posted by DEVAPRIYA
Email ThisBlogThis!Share to TwitterShare to FacebookShare to Pinterest