KERALA Author gets letter threatening him to convert to Islam

Jul 22 2017 : The Times of India (Chennai)
Ramanunni gets letter threatening him to convert to Islam 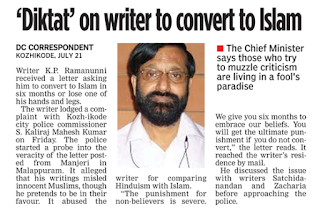 Writer K P Ramanunni has received an anonymous letter threatening to chop off his arm and leg if he fails to convert to Islam within six months.The immediate provocation seems to be a series of articles he wrote in a Malayalam daily in which he pleads for tolerance among Hindus and Muslims in the country . The letter says that there is an ulterior motive behind the article `to mislead innocent Muslims.' Ramanunni said he got the letter a few days ago but kept silent as he didn't want to rake up a controversy . “But I discussed it with some of friends and they told me that it's a serious issue that needs to reported to the police,“ he said.
“My article is a fervent request to all sections of Hindus and Muslims not to subvert the culture of tolerance. I think extremists who operate in the name of Hinduism or Islam could be behind the letter. I have filed a complaint before the city police chief,“ Ramanunni said.
The letter alleges that Ramanunni is trying to present himself as an impartial person and in that attempt he has brought Hinduism and Islam under one umbrella. “While Hindus worship stone, clay , cow, buffalo and rat Muslims pray to one God -Allah -and try to follow the teachings communicated through his messenger,“ the letter said.
The letter added that by way of advising Muslims, Ramanunni has actually criticised Islam. “What Allah told the Prophet is to give six month time for a Kafir (unbeliever) to embrace Islam. So we give you six months to get con verted,“ it said. It threatens the writer that if he failed to do so he will have to face the fate of T J Joseph, whose hand was chopped off by the Muslim extremists for allegedly insulting the Prophet.
It may be recalled that Ramanunni has written a novel “Daivathinte Pusthakam' in which Lord Krishna and Prophet Muhammad appear as characters. The book was widely discussed by Muslim groups in Kerala and in the Gulf countries and has won an award instituted by a cultural organisation in Saudi Arabia.