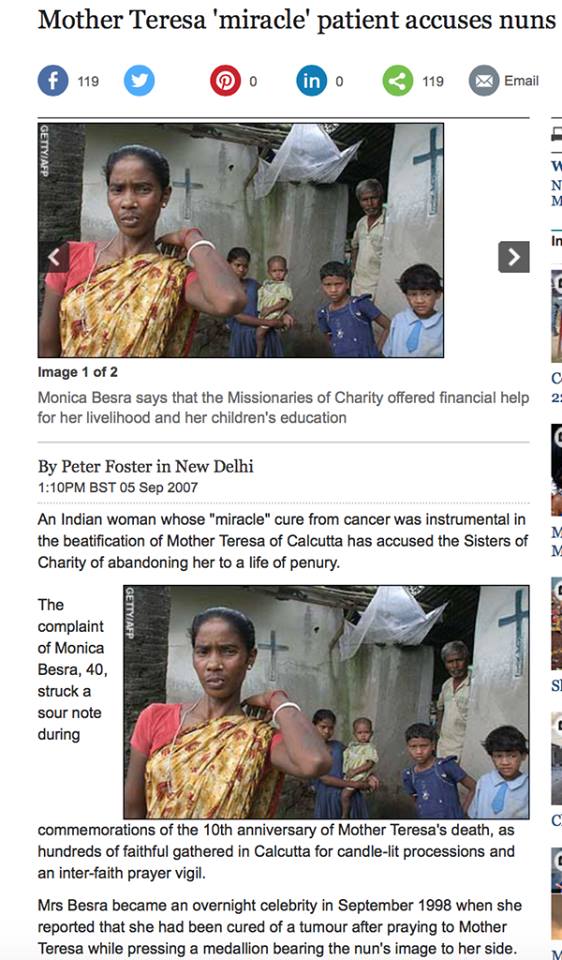 Image 1 of 2
Monica Besra says that the Missionaries of Charity offered financial help for her livelihood and her children's education
By Peter Foster in New Delhi
1:10PM BST 05 Sep 2007
An Indian woman whose "miracle" cure from cancer was instrumental in the beatification of Mother Teresa of Calcutta has accused the Sisters of Charity of abandoning her to a life of penury.

The complaint of Monica Besra, 40, struck a sour note during commemorations of the 10th anniversary of Mother Teresa's death, as hundreds of faithful gathered in Calcutta for candle-lit processions and an inter-faith prayer vigil.
Mrs Besra became an overnight celebrity in September 1998 when she reported that she had been cured of a tumour after praying to Mother Teresa while pressing a medallion bearing the nun's image to her side.
The "miracle" was claimed as Mother Teresa's first posthumous act of healing – she died in 1997 – and was cited at a ceremony in October 2003 in which the Albanian-born nun was beatified by the Vatican.

However more than a decade later, Mrs Besra says she has been abandoned by the nuns who escorted her to Rome four years ago as living proof of their Mother Superior's healing powers.
"My hut was frequented by nuns of the Missionaries of Charity before the beatification of Mother Teresa," said Mrs Besra, squatting on the floor of her thatched and mud house in the village of Dangram, 460 miles northeast of Calcutta.
"They made of lot of promises to me and assured me of financial help for my livelihood and my children's education.
"After that, they forgot me. I am living in penury. My husband is sick. My children have stopped going to school as I have no money. I have to work in the fields to feed my husband and five children."
At Mother House, the global headquarters of the Missionaries of Charity which now has more than 750 homes for the destitute around the world, news of Mrs Besra's complaints was greeted with concern.
Sister Nirmala, Mother Teresa's successor as superior-general, said her case was being looked at.
"Monica Besra herself says she was cured by Mother's miracle. Nuns of the Charity are in touch with Besra. I talked to her over telephone this morning," she said.
"She is upset after her daughter flunked the school-leaving examination this year. We know she is having hard times. We are trying to do our best for her."

Away from Mrs Besra's controversy, hundreds of well-wishers attended a vigil at the tomb of Mother Teresa on Wednesday, offering prayers to her memory and for her elevation to the sainthood.
"She is already a saint to us. It is a matter of time before the Vatican will recognise her as a saint," said Sunita Ekka, who was among the worshippers visiting Mother House.
Mother Teresa's progress towards canonisation was questioned recently after it had emerged in letters written to her spiritual confidant that she had endured a deep crisis of faith late in life.
According to Catholic tradition, two verifiable miracles are needed in order to be eligible for canonisation. "We are waiting for a second miracle for sainthood of the Mother. I am very happy and feel deep gratitude on the 10th death anniversary of the Mother," added Sister Nirmala.
However several groups, including her doctors, have disputed that Mrs Besra was cured by a miracle, claiming instead that her tumour disappeared as a result of medical treatment at the local hospital.
Mrs Besra has said that she visited hospital for treatment and taken prescribed medicines.
In an interview with Time magazine in 2002, Mrs Besra's husband Seiku was among those to challenge the Vatican's claim. "It is much ado about nothing. My wife was cured by the doctors and not by any miracle," he said.
Ranjan Mustafi, a doctor at the local the state-run Balurghat Hospital who treated Mrs Besra, said that the tumour had been caught at an early stage and had "responded to our treatment steadily."
Mrs Besra says that her own faith in Mother Teresa remained unshaken despite the voices of doubters and her own straightened financial circumstances.
"I find peace when I close my eyes and think of her. I often see her in my dreams," she said.