Jul 23 2017 : The Times of India (Bangalore)
Poland protests as House gives reins of judiciary to govt

﻿
﻿
Brushing aside warnings from the European Union and ignoring tens of thousands of protesters in the streets, Poland's Parliament gave approval to a landmark measure on Saturday that would restructure the Supreme Court, putting it under effective control of the governing party.The new law is the latest in a series of acts from the Law and Justice (PiS) party that critics say are aimed at curtailing the judiciary , the country's last bastion of independence. If President Andrzej Duda signs the laws, Poland will take its largest step yet away from the West's liberal values in a nation that was once a symbol of democracy's triumph over communism.
President Duda too sees flaws in the legislation, which gives the government the power to appoint and assess judges, but has stopped short of saying whether he will reject the bill or seek the opinion of a special court, the Constitutional Tribunal.The tribunal has already been put under the influence of the ruling party . Duda has 21days to sign it into law. Senators of the rightwing PiS party agreed to the bill that would remove all Supreme Court justices except those hand-picked by the justice minister. The overhaul of the judiciary , coupled with the party's drive to expand its powers in other areas, has provoked a crisis in ties with the EU and sparked one of the biggest political conflicts since Poland overthrew communism in 1989. The opposition and most legal experts in Poland say the government's overhaul violates the constitution. 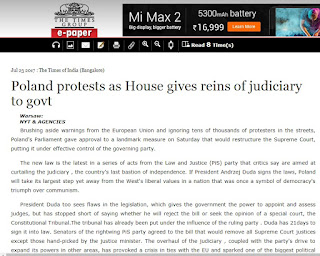