Abraham tales- Why Bible is so unreliable

Abraham is a very important Character in Bible tales.

Galatians 3:16 God gave the promises to Abraham and his child. And notice that the Scripture doesn't say "to his children," as if it meant many descendants.

Romans 4:1 So what can we say about Abraham, the father of our people? What did he learn about faith? 2 If Abraham was made right by the things he did, he had a reason to boast about himself. But God knew different.3 That’s why the Scriptures say, “Abraham believed God, and because of this he was accepted as one who is right with God.”

Abraham is an outsider who migrated from present Iraq.

CHALDEA is in Iraq, but the

name came only in 9th Century BCE, more than 1300 years

later than Abraham and 600

years later than Moses as

How much facts in these Tales- Let us Analyse 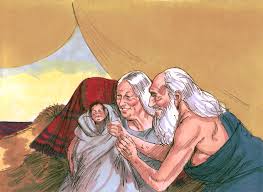 Town and had Kings much later.

In those days Women may have

had additional strength and

story may be true said an

We have seen 8 Generations before Abraham, and in all cases the Male was around 30, which means Female around 20 + Age  Genesis 18:11 Abraham and Sarah were very old. Sarah was past the right age for her Mensuration has stopped was past childbearing.

This story is repeats of above and what Jewish Encyclopedia says

Jewish Encyclopedia:-“From the point of view of the history of culture these episodes are very instructive. But it is not very probable that Abraham would have run the risk twice. Moreover, a similar incident is reported in regard to Isaac and Rebecca (Genesis 34:6-11). This recurrence indicates that none of the accounts is to be accepted as historical; all three are variations of a theme common to the popular oral histories of the Patriarchs. That women were married in the way here supposed is not to be doubted. The purpose of the story is to extol the heroines as most beautiful and show that the Patriarchs were under the special protection of the Deity.

Domestication of Camel took place much later than Abraham days; but when it Camel became so common - so that People can


Camel bones start appear in 9th century, but when it became so common to breed in HOMES, it is only 200 years before JESUS.

The mention of the dromedary in Exodus 9:3 also suggests a later date of composition – the widespread domestication of the camel as a herd animal is thought not to have taken place before the late 2nd millennium, after the Israelites had already emerged in Canaan,[31] and they did not become widespread in Egypt until c. 200–100 BCE.
https://en.wikipedia.org/wiki/The_Exodus   /
The TALES SAY Abraham was given land from Nile to Euphrates - not a Single day in 4000 years HEBREWS Controlled that much land

“According to archeologist William Dever, by the last quarter of the 20th century, ‘respectable archaeologists [had] given up hope of recovering any context that would make Abraham, Isaac or Jacob credible “historical figures”‘.

All are tales without any basis of0.001% truth even