The bald truth is — the Raj ruined us-  UDAY BALAKRISHNAN 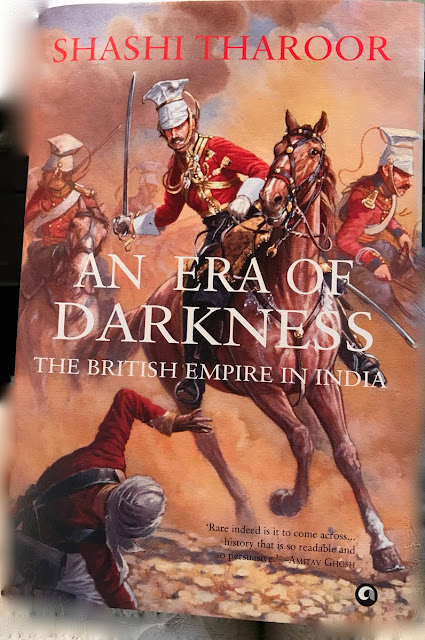 http://www.thehindubusinessline.com/opinion/books/uday-balakrishnan-reviews-an-era-of-darkness-by-shashi-tharoor/article9391768.ece
(A former diplomat  Until 2007, he was a career official at the United Nations, rising to the rank of Under-Secretary General for Communications and Public Information in 2001. After 29 years at the UN, Tharoor announced his departure after finishing second in the 2006 elections for the Secretary-General to Ban Ki-moon.)
In a gripping but perhaps overly grim account, Shashi Tharoor argues that British rule had no redeeming features

Shashi Tharoor’s latest, An Era of Darkness, is one breathless read. In it, he aggregates all the arguments required to establish that British colonial rule was an awful experience for Indians and he does so with a consummate debater’s skill. His book is, in fact, an expanded take on British exploitation of India that famously carried the day for Tharoor in an Oxford debate not too long ago.
According to Tharoor, there was nothing redeeming in British rule of our country. What India had to endure under them was outrageous humiliation on a humongous scale and sustained violence of a kind it had never experienced before. In short, British rule was, according to Tharoor, an era of darkness for India, throughout which it suffered several manmade famines, wars, racism, maladministration, deportation of its people to distant lands and economic exploitation on an unprecedented scale. An indignant Tharoor even demands a token restitution and public apology from the British for all the harm they had caused India. This is something, as his debate established, wildly popular in India.
Looted with impunity

Everything the British did in India, Tharoor asserts, was for their own benefit and never for that of the Indians. They also had, Tharoor tells us, perfected a policy of divide and rule, breaking treaties at will and making war and looting with impunity. Tharoor is right, of course. There are few Indians who would not have heard of the treachery that enabled Clive to triumph at Plassey or of the incredible amounts of ill-begotten wealth the East India Company officials hauled back with them to England. “One official,” Cyril Radcliff informs us, “was said to have pocketed 1,200,000 sterling in bribes from the Nawab of Carnatic: another pocketed 200,000 pounds.” Given the opportunities he had to enrich himself in India, Clive was “amazed at his own moderation”.
There was scant appreciation, Tharoor tells us, of India’s contributions in men, material and money, to the wars that the British fought within India and overseas, especially the two World Wars. The well-known historian and Nehru’s biographer, Judith Brown, acknowledges that “British taxpayers contributed not a penny to the Raj”. Even Niall Ferguson, not one of Tharoor’s favourites, accepts that Indians paid for the “privilege of being ruled by the British”.
That British rule in India was bad in parts has never been denied by anyone, least of all by the British. Their archives are full of accounts of British depredations, covering the entire period of their rule in India. Several of their historians have brought out the suffering the British inflicted on India and Indians throughout their rule of our country. What Tharoor, however, seeks to establish through his book, is that British rule was unremittingly rotten and indefensible by the standards of its time and ours. He makes his points with bare-knuckle indignation and irresistible passion.
Tharoor mourns the annihilation of a gentle social order across the country which he believed was sustained through dialogue and held together by consensus. He also condemns the introduction of harsh and formal legal systems by the British, replacing much kinder, more accessible and personalised traditional ones. In his book, Tharoor is particularly derisive of parliamentary democracy, asserting that what was fine for a small number of people of a much smaller country, is wholly unsuited for a large and raucous one like our own.
Since we have traditionally been poor at archiving our past, practically all the sources that Tharoor rolls in, in support of his contention that British rule was ruinous to the country, are foreign and mostly British. One of them, the eminent economist, Angus Maddison, established that India’s significant share of the world’s trade (27 per cent) evaporated to single digits in no time at all under British colonial administration.
In the most interesting chapter in his book, ‘Did the British give India political unity’, Tharoor advances novel arguments to convince us that India would have emerged united, strong, modern and literate without British help and that claims to the contrary are false and made by apologists for British rule. Here, Tharoor is clearly on slippery ground. Venal as it was, British rule by most accounts, was not all bad.
It is not just the British who thought that their rule benefited India, quite a few Indians hold such an opinion too. One of India’s most respected scholars, the late MS Rajan, is clear that, “Perhaps the single greatest and most enduring impact of British rule over India is that it created an Indian nation, in the modern political sense.”
The makers of India

Kartar Lalwani’s very well researched book, The Making of India — The Untold Story of British Enterprise, is a compelling account of the great infrastructure the British created in India — the railways being one of the most important ones.
Manmohan Singh in a speech in Oxford hailed the British contribution to the making of India. “Today with the balance and perspective offered by the passage of time and the benefits of hindsight it is possible,” he said, “for an Indian Prime Minister to assert that India’s experience with Britain had its beneficial consequences too. Our notions of the rule of law, of a Constitutional government, of a free press, of a professional civil service, of modern universities and research laboratories have all been fashioned in the crucible where an age-old civilisation of India met the dominant Empire of the day. Our judiciary, our legal system, our bureaucracy, and our police are all great institutions, derived from British-Indian administration and they have all served our country exceedingly well.’’
We must not forget that by the time British rule ceased in India, the country had one of the most extensive railway networks in the world, a thoroughly professional army and an administrative system that has endured to this day. Under the British, most of the subcontinent has also been mapped and counted as never before. It was the British who made us aware of our rich cultural and linguistic heritage.

- April 29, 2017
Email ThisBlogThis!Share to TwitterShare to FacebookShare to Pinterest