A court in Saudi Arabia has handed down a 10-year prison sentence along with 2,000 lashes to a man, accused of posting atheistic and irreligious tweets.
The unidentified 28-year-old, who allegedly admitted to be an atheist in the court hearing, was fined 20,000 riyals, about $5,300, along with corporal punishment and jail term, Al-Watan online daily reported on Saturday. 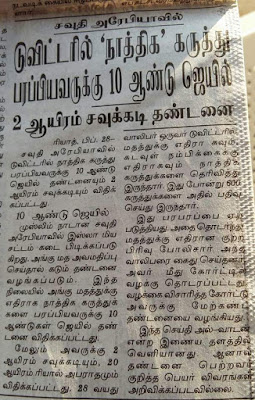 The Saudi religious police said that they have found more than 600 tweets on the convict’s account about denying the existence of God, ridiculing religious beliefs, and disrespecting prophets.
The man has reportedly refused to repent, saying he had expressed what he believed.
The Saudi Arabia’s Committee for the Promotion of Virtue and the Prevention of Vice (CPVPV), or religious police, is a government agency tasked with enforcing Islamic law as defined in the Arab Kingdom. It is also responsible for monitoring social networks.

- February 29, 2016
Email ThisBlogThis!Share to TwitterShare to FacebookShare to Pinterest