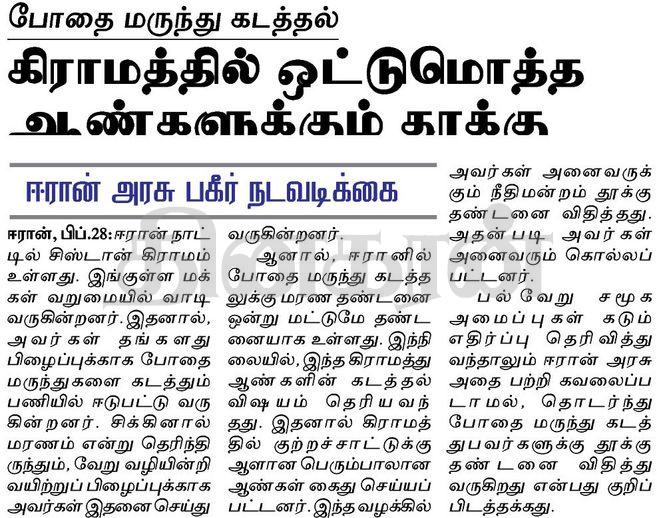 Iranian Vice President for Women and Family Affairs Shahindokht Molaverdi in August 2015. (Tasnim News Agency/Mohammad Ali Marizad)
Iran executed the entire male population of a village for drug trafficking, a senior Iranian cabinet minister said.
In a Persian-language interview with the semi-official Mehr news agency published Tuesday, Iran’s Vice President for Women and Family Affairs Shahindokht Molaverdi didn’t mention the name of the village, or elaborate on when the executions were carried out — or whether they happened all at once or spread over time.
“We have a village in Sistan and Baluchistan province where every single man has been executed,” she said, according to a translation of her remarks by The Guardian.
She warned that as a result, violence there could increase. “Their children are potential drug traffickers as they would want to seek revenge and provide money for their families. There is no support for these people.”
Iran is one of the world’s largest users of the death penalty, ranking second behind China in 2014, according to the most recent figures from Amnesty. Most executions in Iran are carried out for drug smuggling.
The country straddles a major narcotics trafficking route linking opium-producing fields in Afghanistan to Europe. Sistan and Baluchistan province, where the executions in question took place, borders Afghanistan and Pakistan and has been the scene of fighting between smugglers and police.
“If we do not act against these people, crime will return,” Euronewsquoted Molaverdi saying. “Society is responsible for the families of those executed. Although the family support program was neglected for several years, it has now been relaunched as part of the sixth national development plan.”
In late October, the United Nations’ special investigator on the human rights situation in Iran, Ahmed Shaheed, warned that executions in Iran have risen at an “exponential rate” since 2005 and could top 1,000 in 2015. He said Iran puts more people to death per capita than any other country, adding that the majority of executions do not conform to international laws banning the death penalty for juveniles and non-violent offenders.
Shaheed said 69 percent of the executions during the first six months of 2015 were reportedly for drug-related offenses, reflecting the increasing influx of drugs and rising drug abuse in the country.
- February 29, 2016
Email ThisBlogThis!Share to TwitterShare to FacebookShare to Pinterest