Usha Narayanan was buried at the cemetery in 2005. The marble tombstone, with the national emblem on top, carries both her names — Usha Narayanan and her Christian name Ma Tint Tint — “First Lady of India: 1997 to 2002”, along with her husband, described as “a gentle colossus” and “loving husband of Usha Narayanan”. 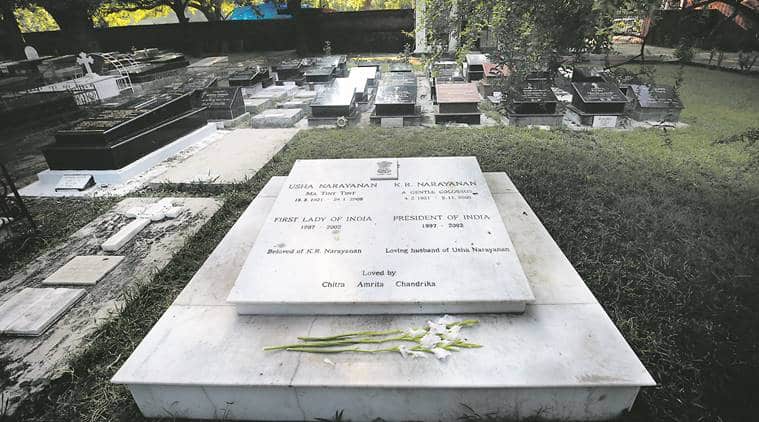 TOP NEWS
A tombstone at the Christian Cemetery on Prithviraj Road in the heart of New Delhi, bearing the names of K R Narayanan and his wife Usha Narayanan, made a Kerala TV channel and a daily, both backed by the RSS, claim that the former President was “converted” to Christianity “after his death”. But the truth, according to the Narayanan daughters, was that their mother wanted to be buried with the ashes of their father.
So after his cremation as per Hindu rites, part of the ashes were immersed in the Ganga, a part taken to Kerala and immersed in the Bharathapuzha river by his brother K R Bhaskaran, “a close associate of the BJP”, a part mingled with those of his parents and a small portion was buried alongside his wife when she died, Narayanan’s family told The Indian Express.
Usha Narayanan was buried at the cemetery in 2005. The marble tombstone, with the national emblem on top, carries both her names — Usha Narayanan and her Christian name Ma Tint Tint — “First Lady of India: 1997 to 2002”, along with her husband, described as “a gentle colossus” and “loving husband of Usha Narayanan”.
On Tuesday, Kerala’s Janam TV channel and, a day later, Janmabhumi daily reported “K R Narayanan was converted into Christianity after his death”. The report said Narayanan was cremated at Rashtriya Smriti Sthal as per Hindu tradition. But three years after Narayanan’s death, his ashes were collected from the Smriti Sthal and deposited at the Church cemetery after constructing a vault. The Church, the report claimed, had kept the matter secret.
The daily said “Narayanan was baptized by the Church after the death of his wife Usha Narayanan in 2008’’. She was buried at the Prithviraj Road cemetery under the Delhi Cemeteries Committee. A tomb was constructed for Narayanan at the cemetery. The report quoted committee secretary Paul V Joshwa as saying the tomb was constructed with government sanction. He was quoted saying that such a tomb was constructed since Narayanan’s wife was a Christian.
According to J Rebello, chairman of Delhi Cemeteries Committee, the cemetery “does not bury non-Christians”. Acknowledging that he had been getting repeated phone calls inquiring about Narayanan’s religion, he said, “I do not know if K R Narayanan was a Christian or not. At the time of his wife’s burial, someone had brought the ashes and claimed that he was a Christian, not a Catholic.”
Daughters Chitra and Amrita Narayanan, in a statement to The Indian Express, said: “K R Narayanan was a Hindu and respected equally all religions”. They said after their father passed away on November 9, 2005, the “state funeral and cremation” took place “according to Hindu rites” in Karma Bhumi near Rajghat, Delhi.
After the funeral, a “part of the urns containing the ashes were by taken by train to Haridwar where they were immersed in the Ganga by the eldest daughter in the presence of the Hindu pandit who performed the ceremony according to Hindu rites,” the statement said.
“The second part of the urns were accompanied by the younger daughter and taken to Kerala where the state government arranged the procession to the Bharathapuzha river, a sacred river of Kerala. The ashes were immersed according to Hindu rites by Shri K R Narayanan’s younger brother, Shri K R Bhaskaran who was a close associate of the BJP. Part of the ashes were mingled with those of Shri K R Narayanan’s late parents,” they said.
Finally, “a small portion of the ashes were retained by his widow Smt Usha Narayanan, a Christian, to be buried alongside her. At her passing in 2008, this was done according to her wishes at the Prithviraj Road cemetery. This was an entirely private wish and should be respected accordingly,” the daughters said.
Posted by DEVAPRIYA
Email ThisBlogThis!Share to TwitterShare to FacebookShare to Pinterest