யாத்திராகமத்தில் சினாய் மலையில் மோசே 10 கற்பனை பெற்றார் என வருவது, கீழே வருவதை பாருங்கள்.
Deuteronomy 1:1These are the commands that Moses gave the Israelites while they were in the Jordan Valley, in the desert east of the Jordan River. This was across from Suph, between the desert of Paran and the cities Tophel, Laban, Hazeroth, and Dizahab. 2 The trip from Mount Horeb through the mountains of Seir to Kadesh Barnea takes only eleven days. 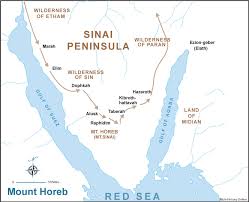 Mount Horeb, Hebrew: חֹרֵב, Greek in the Septuagint: χωρηβ, Latin in the Vulgate: Horeb, is the mountain at which the book of Deuteronomy in the Hebrew Bible states that the Ten Commandments were given to Moses by God. It is described in two places  (Exodus 3:1, 1 Kings 19:8) as הַר הָאֱלֹהִים the "Mountain of God". The mountain is also called the Mountain of YHWH.
In other biblical passages, these events are described as having transpired at Mount Sinai. Although Sinai and Horeb are often considered to have been different names for the same place, there is a body of opinion that they may have been different locations.[1]
Torah tales were composed by few groups -
Y- god yahweh -group; E-God Elohim group; P- importance to Pastors D- Deuteronomy group.
All these TALES Belong to First Century BCE in its present form. 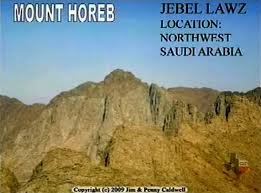 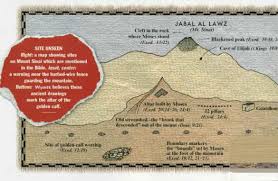 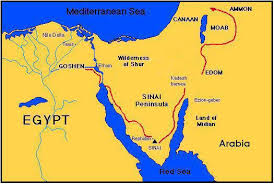 Present translations mostly use Sinai in all places - which is Fraud.
According to some biblical scholars, Horeb is thought to mean “glowing/heat”, which seems to be a reference to the sun, while Sinai may have derived from the name of Sin, the Sumerian deity of the moon,[3][4] and thus Sinai and Horeb would be the mountains of the moon and sun, respectively. Alternatively, “glowing heat” could be a reference to a volcano.
Sinai is Moon worship group's Holy Mountain.
HOREB IS SUN worship group's Holy Mountain.
AS Per Archaeology none of this area gives any Trace of 30 Lakh Exodus Heap of Hebrews ever occupied.
Posted by DEVAPRIYA
Email ThisBlogThis!Share to TwitterShare to FacebookShare to Pinterest