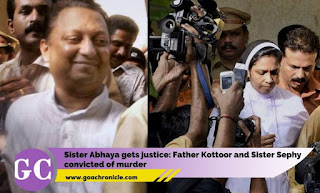 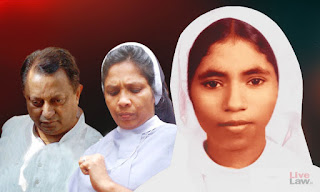 A special CBI court in Thiruvananthapuram Tuesday found Father Thomas Kottoor and Sister Sephy guilty in the case pertaining to the murder of Catholic nun Abhaya. Kottoor, 69, and Sephy, 55, were charged under Section 302 (murder) and Section 201 (destruction of evidence) of the Indian Penal Code (IPC). The quantum of punishment will be delivered on Wednesday.

The verdict came 28 years after the body of the nun was found in a well of her convent hostel in Kottayam. During the course of the hearing, the HC had allowed the discharge petition of Father Puthrikkayl, the third accused in the case. 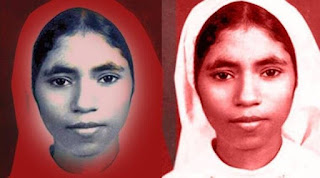 The victim and accused belong to the Knanaya Catholic Church, headquartered in Kottayam. At the time of her death, Abhaya had been a pre-degree student in college run by the Catholic Church. She had been an inmate of Pious Xth Convent Hostel, which had 123 inmates, including 20 nuns, in 1992 when the incident happened.

During the trial, eight of the 49 prosecution witnesses turned hostile. However, the court relied upon circumstantial evidence and the statement of a thief named Adakka Raja. Raja had happened to see the priests at the hostel, where he had sneaked into in the early hours of March 27, 1992, the day of the incident.

Prosecution case: The crux of the CBI case is that Sephy had a clandestine affair with two priests, both teaching in a college in Kottayam. On the day of the incident, Abhaya had been preparing for an exam. Her colleague Sister Shirly woke her up at 4 am that morning. She then went to the kitchen to take cold water from the fridge to wash her face to keep her awake. When Abhaya entered the kitchen, she allegedly saw the two priests, Kottoor and Puthrikkayl, and the nun in a compromising position. Fearing she would disclose the incident, the first accused, Kottoor allegedly strangulated her while the third accused, Sephy, allegedly beat her with an axe. Together, they dumped her body in a well within the compound.

Three investigations, conflicting stands: The local police had probed the case on the day Abhaya was found dead. A case of unnatural death was registered based on a statement given by Sister Leissue, Mother Superior of the Convent. On April 13, the crime branch wing of state police took over the probe, and, on January 30, 1993, submitted a final report saying that Abhaya had committed suicide.

CBI moved: The CBI took up the investigation a year after the incident, on March 29, 1993. The probe was handed over to the central agency based on a complaint given by Sister Banicassia, Mother Superior, and over 65 other nuns, to then chief minister K Karunakaran. Alleging Abhaya was murdered, they said the case was not being investigated properly and appealed to the CM to entrust the investigation to the CBI.

The CBI registered an FIR saying it could not conclude whether it had been a case of suicide or homicide, mainly because of the medical evidence. It was, however, reported that “assuming it to be a case of homicide, all possible efforts were made to determine the identity of culprits, if any, could have been involved in this tragic incident. However, our prolonged efforts, as indicated in the preceding paras, did not yield any fruitful results.”

However, the chief judicial magistrate court did not accept this report filed by SP CBI A K Ohri.

The agency continued its probe, this time under its Deputy SP Surinder Paul. He filed a second final report stating that the cause of death was homicide. Despite the best efforts made during the investigation, the identity of the culprits could not be established, and a request was made to accept the report and treat the crime “as closed being untraced”. The conclusion of “homicide” was reached mainly based on the medical opinion given by three doctors, as against the opinion given by Dr C Radhakrishnan, who conducted an autopsy on the body of Abhaya. This report was also not accepted by the court.

As the court rejected the second final report, the CBI continued the probe under another officer, R R Sahay. In another final report on August 25, 2005, the CBI stated that “further investigation conducted, at the behest of the court, has not indicated involvement of any person in the death of Sister Abhaya” and a request was made that the “case be treated as closed as untraced”. The court did not accept the probe and the investigation continued.

On September 4, 2008, the High Court handed over the investigation to the CBI’s Kerala unit in Kochi. By then, the CBI had approached the judiciary to close the case four times for want of evidence.

Arrest of the accused: In early November 2008, the HC handed over the case to the state unit of CBI, and gave a three-month period to complete the probe. The new team, led by Dy SP Nandakumaran Nair, had recorded the statement of Sanju P Mathew, who had been residing next to the convent when Abhaya died. Sanju, in his statement as per Section 164 of CrPC, said he had seen Kottoor in the convent hostel campus on the night of March 26, 1992, a day before Abhaya was found dead. Based on this statement, the CBI on November 19, 2008, arrested Kottoor, Puthrikkayl and Sephy.

Chargesheet: On July 17, 2009, the CBI submitted its chargesheet against the arrested persons. The special court began the trial last year. Sister Abhaya, at the time of her death, was a pre-degree student in a college run by the Catholic Church.

Narco analysis, turning point in probe: On July 6, 2007, the court ordered the CBI to subject the suspects to narco-analysis tests. On August 3, 2007, the agency conducted the tests in Bengaluru. But the CBI could not proceed as no hard evidence was left to substantiate the results of the test.

In August 2008, the CBI informed the HC that no new facts had emerged from the narco-analysis test conducted on the two priests and nun, but it would not leave any stone unturned to unravel the mystery surrounding Abhaya’s death and bring the culprits to book. Even though the CBI was convinced that Abhaya had been murdered, it was unable to trace the assailants. The copy of the original narco-analysis CD was given to the court.

Narco CDs found tampered with: A team of technical experts in the Centre for Development of Imaging Technology (C-DIT), Thiruvananthapuram had found that master tapes of the narco-analysis tests, conducted on the three persons before their arrest, had been tampered with. The 32-minute, 50-second CD of the narco-analysis performed on Kottoor was edited in 30 places. The CD of Puthrukkaayil (40-minute, 55-second) was edited in 19 places, while the 18-minute, 42-second CD of Sister Sephy was edited at 23 places. C-DIT was asked to look into the narco CDs at the behest of CJM court in Kochi, which has been monitoring the probe.

Narco-analysis not used as evidence: In December last year, the HC ruled that results of narco-analysis and brain mapping process done on the accused cannot be used as evidence. The court held that the results of such scientific tests, even if carried out with the consent of the accused, can be used only for the purposes of proving discovery of fact in accordance with Section 27 of the Indian Evidence Act. 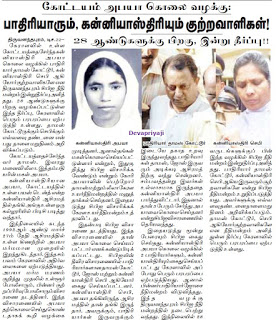 Hence, the trial court did not examine doctors N Krishnaveni and Pravin Parvathappa, of CFSL, Bengaluru, who had conducted the narco-analysis tests. The court noted that the petitioners were yet to be accused at the time of the tests.

Circumstantial evidence relied upon by CBI: The most crucial evidence relied upon by the CBI had been the disturbance in the kitchen. The water bottle had fallen down near the fridge with dripping water, the veil was found underneath the exit door, which was found locked from the outside — the latches inside were unlatched — an axe and a basket had fallen down, two slippers of Abhaya were found at different places in the kitchen, and altogether, the area exhibited an appearance of having had a tussle inside. But, there was no blood on the scene.

- December 22, 2020
Email ThisBlogThis!Share to TwitterShare to FacebookShare to Pinterest