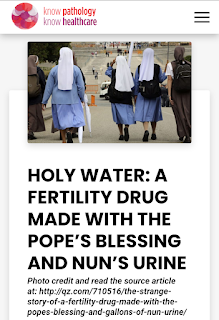 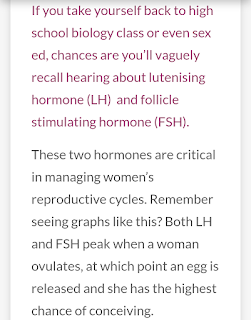 Photo credit and read the source article at: http://qz.com/710516/the-strange-story-of-a-fertility-drug-made-with-the-popes-blessing-and-gallons-of-nun-urine/

If you take yourself back to high school biology class or even sex ed, chances are you’ll vaguely recall hearing about lutenising hormone (LH)  and follicle stimulating hormone (FSH).

These two hormones are critical in managing women’s reproductive cycles. Remember seeing graphs like this? Both LH and FSH peak when a woman ovulates, at which point an egg is released and she has the highest chance of conceiving.

So it makes sense that for some women having trouble getting pregnant, injecting hormone supplements at the right time can increase their chances.

Italian scientist Piero Donini was one of the first people to figure this out. In the 1940s he tested the urine of hundreds of women for LH and FSH. He realised that the average concentration was highest in women who had gone through menopause. Donini isolated the hormones from some of his test urine and called it “Pergonal” – Italian for “of the gonads” (and taking you back to high school biology again, gonads are ovaries and testes).

You may have even had Pergonal yourself – it has been responsible for millions of babies born via assisted reproduction over the last few decades.

Whilst Donini was sure his Pergonal had a role in helping couples conceive, the challenge was where to source commercial quantities of urine from which to isolate it. Eventually the stars aligned and he met an Austrian doctor who was interested in boosting the birth rate among European Jews. The Jewish population had been hugely depleted during the Holocaust and Bruno Lunenfeld saw a chance to help rebuild the community.

Lunenfeld introduced Donini to a board member from Italian pharmaceutical company Serono, who happened to be the nephew of then Pope Pius XXII. Upon hearing the story from his nephew, the Pope decreed that the Vatican would help by asking retired nuns to donate their urine. It also didn’t hurt that the Vatican owned a 25% stake in Serono!

It would take 10 nuns 10 days to produce enough urine for a single treatment. In 1962 the first baby was born following Pergonal treatment in Tel Aviv, Israel. By the 1980s, demand had soared so high that the company began to synthesise the hormone in laboratories. It was rebranded as Gonal-F around the same time.

So next time your GP decides to measure your homone levels, either for fertility reasons or menopause onset, spare a thought for contribution that hundreds of retired Italian nuns made to modern IVF. 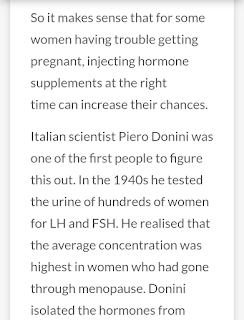 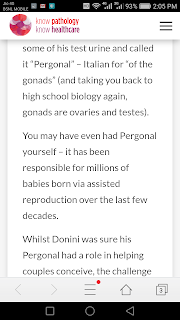 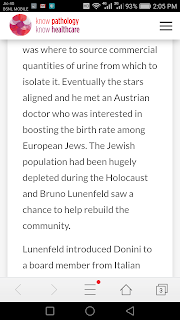 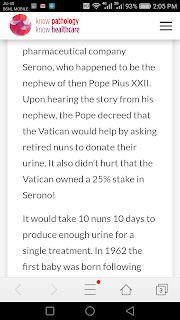 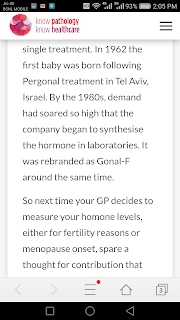 - May 25, 2021
Email ThisBlogThis!Share to TwitterShare to FacebookShare to Pinterest