You are here: Home » National » US deports Indian students of California-based varsities 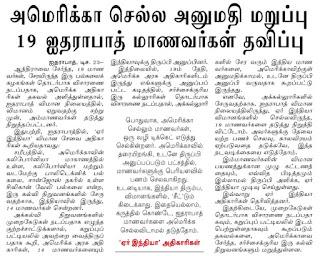 The Unites States Customs and Border Protection agency deported 14 Indian students who had got admission into two California-based universities, that are under “scrutiny” of American authorities.
Following this, the Air India barred several students from Andhra Pradesh and Telangana from boarding its flight to the United States.
Since December 19, around 50 students with valid student visas, I-20s and flight tickets were not allowed to board Air India’s flight to San Francisco from Rajiv Gandhi International Airport at Shamshabad here.
The national carrier said on Monday that it received a communication on December 19 from the US Customs and Border Protection agency that two universities — Silicon Valley, San Jose, California and Northwestern Polytechnic University, Fremont, CA — are under scrutiny and students who arrived in San Francisco were deported to India. So far, 14 students who travelled to San Francisco have been deported.
“Students travel on a one-way ticket to the US and in the event of deportation, they incur huge expenditure on a ticket back to India on first available service. As a precautionary measure and to avoid inconvenience, students who have booked for travel to take admission to these universities are not being accepted on Air India flights,” the airliner reasoned.
No additional cost
“Air India will start accepting students travelling to the US, to join the above universities, at no additional cost, as soon as clearance is received from Air India US office,” a statement said.
However, the students who purchased tickets protested at the national carrier’s office here, saying the airliner has no right to stop them from reaching the US. These students are supposed to join the varsities by January 10; the orientation programme is slated for January 4.
Return problematic
“The university is functioning normally and we have completed our examinations on Saturday. The authorities say the university is not blacklisted. However, they are discouraging us from coming home for Christmas holidays as returning might be a problem,” an MBA student at the Northwestern Polytechnic University said. “In the absence of any official confirmation from the US or Indian government, how can we trust the airliner,” asked Mallesh, the father of a student.
Posted by DEVAPRIYA
Email ThisBlogThis!Share to TwitterShare to FacebookShare to Pinterest