Pattanam Excavations- Must be handed over to ASI

Vanchi -Karuvur mentioned in Sangam Literature is Karur between Erode and Trichy in Tamilnadu, which is very clearly confirmed by Archaeological finds and other sources.
Renowned Archaeologist Dr. R.Nagaswamy has combined all the details as a book and has loaded in his website as Roman Karur. 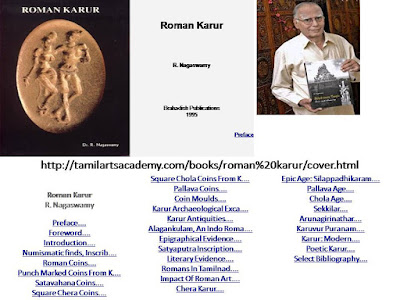 Literary sources was completely researched and highly regarded tamil Scholar Maha Vidwan.Ragava Iyengar has written a book in this regard also. 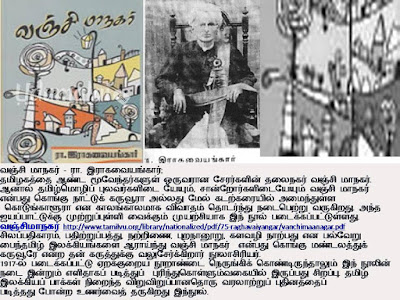 Later Cheras moved to Wester Coast after Sea has moved back by a Tsunami or any other natural Calamity and as per practice all over the world, named the new towns by their Old areas such as Thiru Vanchi Kalam etc., and built temple for Kannagi(Bagavathi temple) - all these were in 9th century or later.
WHY THIS CONNFUSION?
Copper plates of Kerala- Church Historians call it St.Thomas Christian Copper Plates, but the names mentioned and other details say they are given to Manichettys- Pearl Merchant guild.
We do not have the original copper plates, the so called recovered was given to Rev.Cladius Buchanan who submitted to Cambridge University and while making a local copy- changed Mahodayakadu - to Muyurikodu in one of the plates.
This wrongly changed Muyurkodu was said as Muzuris of Sangam Literature.
KERALA CHURCHMEN AND POLITCIANS WANTED Archaeological Survey of India to excavate in Kodungallur and surroundings.
ASI Excavated Kodungallur in 1947, under P.Anujan Achan  and found articles of 14th century or later only.
KERALA CHURCHMEN AND POLITCIANS put on pressure showing the above referred Copper plate and wanted ASI do more detailed Survey
rchaeological Survey of India under Highly Reputed Archaeologists Dr.K.V.Raman went for excavation , K.V.Raman and K.V.Saundararajan (1969-70). Archaeological sites such as
Cheraman Parambu
Thiruvanchikulam
Karuppadanna
Mathilakam
Kilatali
Thrikkulasekharapuram etc.,
provided cultural remains of iron and copper tools, glass beads, semi precious stones, ceramics of dull red ware, celadon ware roof tiles, earthen lamps and coins. They are all dated between 900-1100 A.D..

ASI conducted detailed Researches in and around Kodungallore by Prof.Dr.Raman, Unnithan & Mr. K.V.Saundararajan, they went in for detailed research and found only the remains from 9th -10th century only, and Virgin Soil without Human habitation by 9th Century.
Dr.K.V.Raman wrote a book on his excavations in Tamil and has given details about Kodungallur excavations in each of his locations and all locations in and around Kodungallore (Cranganore) had same type and that Human Habitaion took place in Later chera period in 9th Century CE Only. 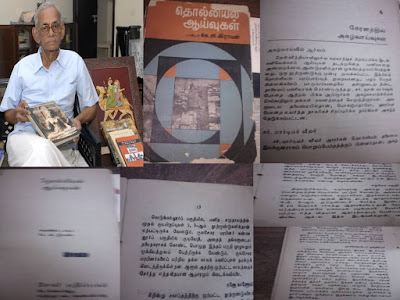 CHURCH LIES NAILED EARLIER ALSO BY
ASI Earlier In Chennai - On Sea Shore Christian church called Santhome stands, and church preaches it as Tomb of Apolstle St.Thomas. ASI Was requested to Excavate Santhome and the findings proved that the God temple of Kapaleeswarar was removed from that location and that Portugese built the Church in 16th Century only.
KERALA CHURCHMEN AND POLITICIANS WANTED to make proofs for so called visit of  Apolstle St.Thomas to Kerala, which as per a song in Malayalam called Ramban Pattu - made in 19th Century (as per Literary research) says that Thomas landed in Cranganore and built 7.5 Churches in the coast line.


KERALA CHURCHMEN AND POLITICIANS understood ASI would not accept planting evidences so formed Kerala Council of Historical Research mainly run by two Political Historians Dr.Panikcer (has P.Hd inpeasant protests and revolts of the 20th century in Malabar) and
P.J. Cherian(Dr. P. J. Cheriyan has worked on “Vayalar – Punnappra Communist sponsored violence in the erstwhile Princely State of Travancore [now in south-Kerala]” as topic for his PhD dissertation) both has No Archaeological background and known for partisan approach.
Now KCHR claims to be having backing from Several Christian International Universities around the globe.
Expert nails false propaganda on Muziris.
Stating that P.J. Cherian, Director, Kerala Council for Historical Research, had told him that about 6,800 broken pottery of this particular variety had been found in three trenches at the site, Dr. Nagaswamy said this was extraordinary.
Dr. Nagaswamy said that square copper coins (on one side elephant and on the other bows and arrows) had also been found at the site. “These type of coins were issued in the beginning of the Christian era. But what has not been found is one type of highly polished red type of pottery with the stamp of Roman potters. That has been found in the east coast in excavations near Puducherry,” he said.
Dr. Nagaswamy said there was lack of evidence to show that the artefacts unearthed at Pattanam came specifically from Rome. ‘‘We are yet to get more information that this is connected directly to Italy,'' he said.
T. Sathyamoorthy, former Director, Department of Archaeology, Kerala, presided. The ‘Muziris-Attimariyude Reethisasthram' published by the Muziris Heritage Preservation Forum was released on the occasion.

Pattanam excavations form part of the Muziris Heritage Project (MHP ) launched by the KCHR and headed by Chairman Dr KN Panikkar, former Professor of Jawaharlal Nehru University (JNU), and Director Dr PJ Cherian, a modern historian who heads archaeological excavations. In a write up for Malayalam journal Mathru-bhumi in 2014, Professor PM Rajan Gurukkal, historian and one of the members of the MHP  arguing for Pattanam also admitted that the site was unfit for any archaeological excavation as the soil has been virtually tampered for various construction purposes and digging of wells leaving no space for stratigraphical analysis of the cultural remains which have agglomerated. Surprisingly until now, no historian or archaeologist or any professional body such as the ASI has come forward in defence of the KCHR or Pattanam. Even Professor Romila Thapar, one of the patrons of the MHP  is virtually silent.

Professor PM Rajan Gurukkal, historian and one of the members of the MHP  also admitted that the site was unfit for any archaeological excavation as the soil has been virtually tampered for various construction purposes and digging of wells leaving no space for stratigraphical analysis of the cultural remains which have agglomerated.

The site of Pattanam is located near Parur in Ernakulam District of Kerala. It was declared by the KCHR MHP  that the aim of the MHP  was to excavate and discover the lost settlement of Muziris, the ancient Chera capital on the Periyar River basin and hence named MHP . The geomorphology of Kodungallur, considered ancient Muziris, was examined by Geologists KK Nair and CS Subrahmanyam in 1993 in the archaeological context, which revealed that the area has been completely disturbed and the habitation material deeply buried due to tectonic changes.
Later elaborating further, in an interview given to Frontline dated April 2010, Panikkar made his stand much clearer. He suggested public participation in archaeological excavations at Pattanam–which he termed “Democratic Archaeology”–in which the local people would be part of the excavation. In other words, archaeologists and ASI need not interfere in excavations since guidelines and diggings shall be by ‘People’s Democracy’.
Keeping Archaeologists at bay was a necessity for KCHR since expert observations and remarks can lead to serious implications for Pattanam.
Renowned historian -Professor MGS Narayanan, Renowned - Archaelogists Dr.Nagaswamy, Dr.T.Sataymoorthy, National Museum Archaeology Protection Department head M V Nair have all raised concern that with Very Little findings great claims are being made and spread all over the world.
http://haindavakeralam.com/HkPage.aspx?PAGEID=13876&SKIN=C
Prof. C. I. Issac,   Former Head of Department of History, Mahatma Gandhi University, Kottayam, Kerala and member,  The Indian Council of Historical Researches has written doubting this excavtions done to prove -"Conclusions have already been drawn before the Pattanam excavation was launched."
For further reading   Chera Vanchi is Karur     Kodungallur Not Muzuris-ASI

Kodungallur was under Sea till 900CE  கொடுங்கல்லூர் அகழ்வாய்வுகள் -இந்தியத் தொல்பொருள் துறை
ALL SITES OF KCHR-PATTANAM must be handed over to ASI and even all the existing trenches must be checked for remains of the so-called earlier findings.
Further Excavations must be done by ASI Only.
Till a City type huge Port with its infrastructure are found by ASI, using of name Muzuris must be banned
- September 10, 2015
Email ThisBlogThis!Share to TwitterShare to FacebookShare to Pinterest 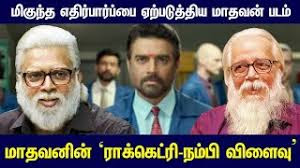