KCHR has not come to any conclusion that Pattanam is Muziris. -     Prof K.N. Panikkar, chairman of KCHR
http://www.deccanchronicle.com/local/kochi/should-tourism-bury-history-749

Prof K.N. Panikkar, chairman of KCHR, said that the tourism component has been included in the project to raise money for it.  He also said that KCHR has not come to any conclusion that Pattanam is Muziris.
See here How these haphazard research which has not found a Port City at all, has been used to spend more than 70 Crores of Public Tax payers money.


Total expenditure would be Rs.73.2 crores ONLY... 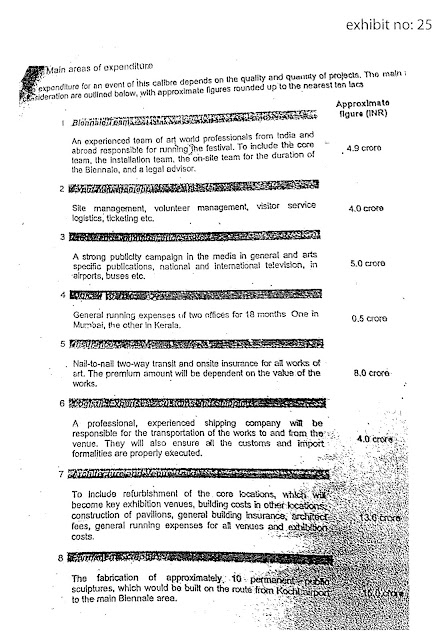 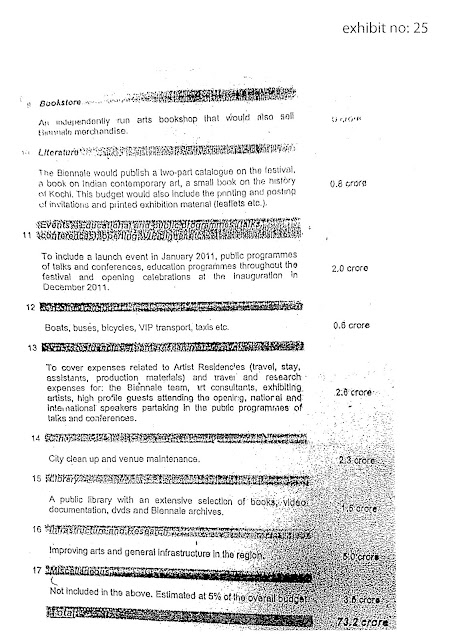 1.       Trust claims that it follows western model. In fact this trust does not follow any biennale model in its philosophical unity. It sends out false information to collect funds. Generally, biennales are done with the participation and collaboration of public sector, universities, cultural organizations, local bodies, galleries, corporations and municipalities. This trust has not done anything towards including all these. They have not even included a single artist in their committee. Other biennales collect funds from the private sector through shares and the government support is nominal. For example Venice Biennale has 87.3% of private investment.

2.       Trust says that the total expenditure would be Rs.73.2 crores. But the whole expenditure is explained in two pages! If one scrutinizes the project one could see that the whole project is all about squandering of money.

4.       The salary for the organizers is Rs. 5 Crores. That means each year the government should find Rs.2.5 crore to give salary to the Biennale members.

5.       The trust has Kochi and Mumbai offices. And the rent is estimated as Rs.50 lakhs. None knows why Kochi biennale needs an office in Mumbai. This particular office was former studio of Bose Krishnamachari.

6.       This studio was renovated spending the government/biennale money.

7.       Rs.13.5 crores for furnishing buildings and preparing them for exhibitions. One could make several new establishments with this kind of money.

9.       Rs.1.6 crore for setting up a library. It was a year back the government had opened a well equipped library just next to the Durbar Hall in Kochi. It is called ‘CARE’.

10.   Above all there is another Rs.5 crore for general infrastructure development.

11.   The government approved this outlandish expenditure proposal without batting an eyelid. Exxbt. 25

M.A.Baby travelled to foreign countries with the trust members.

1.       There could have been cost cutting in the declaration of biennale. Instead, they did a gala program on 17th February 2011 in Kochi Durbar Hall Ground. A total of 32 to 38 lakhs rupees has been spent on this event by flying down friends from various parts of the country and providing them five star treatment. No important art personalities were invited.

2.       The trust threw parties in Venice, Paris, Delhi and Kochi. Government money was used for this.

3.       Trust spent around Rs.60 lakhs as travel expenditure. Also they have drawn lakhs of rupees in the name of accommodation and food.

4.       During 3, 4, 5th of June 2011, former Cultural Minister of Kerala, Mr.M.A.Baby travelled to foreign countries with the trust members. Mr.Baby is neither a trust member nor a member of any biennale committee. Exbt. No.23

Dear friends
Kochi biennale foundation during the opening of the durbar hall invited artists to a party at casino hotel on 27 nov 2011. the following was the message. `Hello, Kochi Biennale Foundation(KBF) cordially invites you to have a peek at the refurbished LKA Durbar Hall to be inaugurated by the honourable CM of Kerala,Shri.Oommen Chandy on the 27th of Nov @ 4.30 p.m Would lv to have you with us to experience the transformation at the Durbar hall and thereafter to a celebration in honour of the artists, KBF would luv to have your presence at 7pm Casino Hotel, Willington Island, Kochi for dinner and an evening of music- Rgds, Trustees of the KBF.' the following message was sent to the artists in response to it `dear artist, during the opening of the durbar hall, the participants of the show organised by the lalitha kala akademi are invited by the biennale foundation for a celebration at casino hotel. 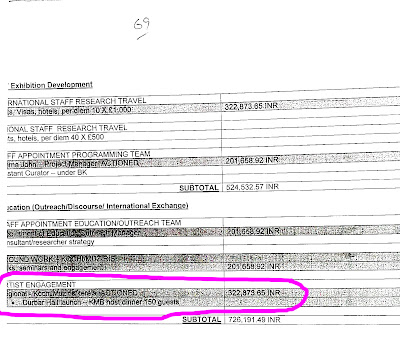 the biennale foundation is utilising only the govt fund for the renovation of the gallery and may be for the coming celebration as well. they announce this as from their behalf but paid from the pocket of the common people of kerala. we should think about accepting this invitation as the the activies of the foundation is now under debate from many social corners of kerala. we request all the artists of kerala to stand together and be proud as an artist of value and ethics. your opinions are most welcome regards lantern fine arts society'. the doubts were cleared by the foundation as it was them only spending the money and not from the public fund as argued. but now it became clear that the money was expected to be spent from the biennale fund from the government of kerala. please see the attachment for details
- September 18, 2015
Email ThisBlogThis!Share to TwitterShare to FacebookShare to Pinterest