Ted Cruz Invokes India To Contest Donald Trump's Demonisation Of All Muslims
The moderation of India's nearly 200 million Muslims in a plural, democratic country got a famous thumbs-up in a raucous Republican presidential debate on Wednesday where rivals piled on to front-runner Donald Trump's perceived hostility to the Islamic faith.Texas Senator Ted Cruz, second only to Trump in some polls, invoked India to contest the maverick billionaire's demonisation of all Muslims, saying the focus on fighting extremism should not be based on faith, but on the “political and theological ideology that seeks to murder us“.
“I'm reminded of what FDR's grandfather said, all horse thieves are democrats but not all democrats are horse thieves,“ Cruz joked in a folksy swipe at Democrats while making the point that not all Muslims are terrorists or extremists. “In this instance there are millions of peaceful Muslims across the world, like in India, where there is not the problems we are seeing in nations that are controlled by al-Qaida or IS.“
While many American leaders -notably George W Bush when he was President -have expressed admiration for India's plural and secular nature that has its nearly 15% Muslim population living in relative harmony amid aberrations, the reference to it in the current GOP line-up was unexpected, given their insular outlook, their hyper-nationalism, and their modest grasp of foreign history .
In fact, the debate saw candidates trying to outdo each other in projecting a muscular foreign policy with one aspirant (John Kasich) wanting to “punch the Russians in the nose,“ another (Chris Christie) ready to shoot down Russian planes if they violated a US enforced no-fly zone in Syria. But Trump trumped them all, going as far as to suggest he would approve killing family members of IS terrorists to defeat them.
“You look at the attack in California the other day -numerous people, including the mother that knew what was going on,“ Trump said in a reference to the San Bernardino terrorist strike initiated by two Pakistani-origin jihadis. “They saw a pipe bomb sitting all over the floor. They saw ammunition all over the place. They knew exactly what was going on.“
“I would be very, very firm with families,“ he added.“Frankly , that will make people think, because they may not care much about their lives, but they do care, believe it or not, about their families' lives.“
Retired neurosurgeon Ben Carson also appeared to support such a policy , comparing it to his experience of taking out children's brain tumors: “They don't like me very much (when I say I have to perform surgery), but later on they love me.“ Asked if he was OK with the deaths of civilians in the war on terror, Carson said, “you got it“.
There were no outright winners in Wednesday's debate held in Las Vegas, but Trump made the important declaration that he's committed to the Republican Party and will not run as an independent.
There are apprehensions in some quarters that if party bosses that he will run as an independent and split the Republican base of the party bosses unfairly deny him the nomination he looks like winning fair and square. 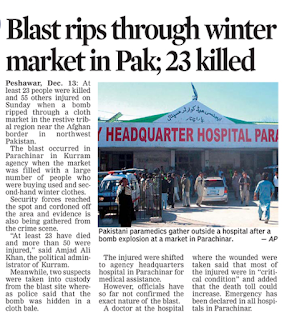 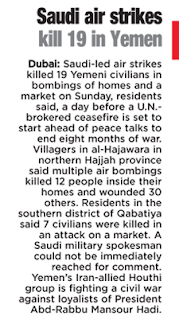 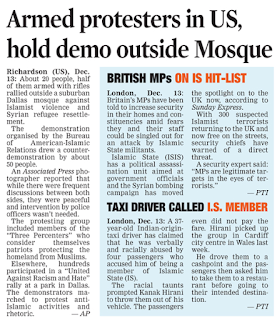 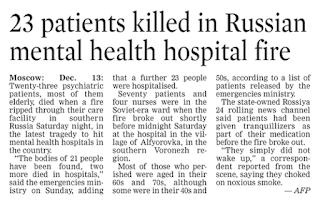