The sacking of VS Achuthanandan from the CPM politburo yesterday wasn't the first time the octogenarian chief minister of Kerala had been punished by his party for indiscipline. Nor was it the first time that the veteran comrade had decided to stand his ground in the face of opposition from the party leadership. 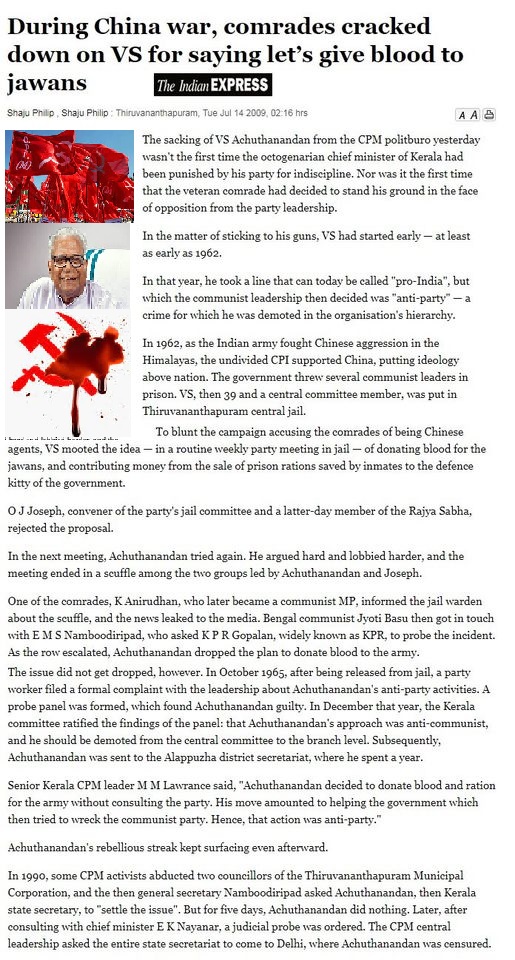 http://archive.indianexpress.com/news/during-china-war-comrades-cracked-down-on-vs-for-saying-let-s-give-blood-to-jawans/488983/1
In the matter of sticking to his guns, VS had started early — at least as early as 1962.

In that year, he took a line that can today be called "pro-India", but which the communist leadership then decided was "anti-party" — a crime for which he was demoted in the organisation's hierarchy.

In 1962, as the Indian army fought Chinese aggression in the Himalayas, the undivided CPI supported China, putting ideology above nation. The government threw several communist leaders in prison. VS, then 39 and a central committee member, was put in Thiruvananthapuram central jail. 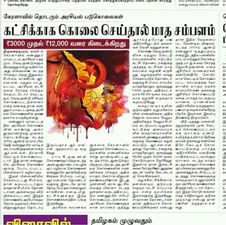 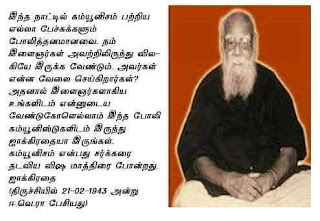 To blunt the campaign accusing the comrades of being Chinese agents, VS mooted the idea — in a routine weekly party meeting in jail — of donating blood for the jawans, and contributing money from the sale of prison rations saved by inmates to the defence kitty of the government.

O J Joseph, convener of the party's jail committee and a latter-day member of the Rajya Sabha, rejected the proposal. 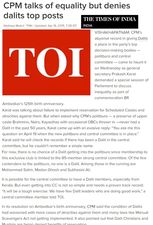 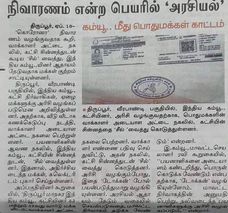 In the next meeting, Achuthanandan tried again. He argued hard and lobbied harder, and the meeting ended in a scuffle among the two groups led by Achuthanandan and Joseph.

One of the comrades, K Anirudhan, who later became a communist MP, informed the jail warden about the scuffle, and the news leaked to the media. Bengal communist Jyoti Basu then got in touch with E M S Namboodiripad, who asked K P R Gopalan, widely known as KPR, to probe the incident. As the row escalated, Achuthanandan dropped the plan to donate blood to the army.

The issue did not get dropped, however. In October 1965, after being released from jail, a party worker filed a formal complaint with the leadership about Achuthanandan's anti-party activities. A probe panel was formed, which found Achuthanandan guilty. In December that year, the Kerala committee ratified the findings of the panel: that Achuthanandan's approach was anti-communist, and he should be demoted from the central committee to the branch level. Subsequently, Achuthanandan was sent to the Alappuzha district secretariat, where he spent a year.

Senior Kerala CPM leader M M Lawrance said, "Achuthanandan decided to donate blood and ration for the army without consulting the party. His move amounted to helping the government which then tried to wreck the communist party. Hence, that action was anti-party."

In 1990, some CPM activists abducted two councillors of the Thiruvananthapuram Municipal Corporation, and the then general secretary Namboodiripad asked Achuthanandan, then Kerala state secretary, to "settle the issue". But for five days, Achuthanandan did nothing. Later, after consulting with chief minister E K Nayanar, a judicial probe was ordered. The CPM central leadership asked the entire state secretariat to come to Delhi, where Achuthanandan was censured. 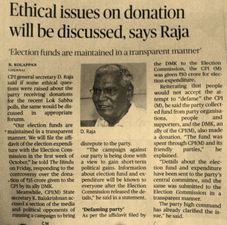 - May 30, 2022
Email ThisBlogThis!Share to TwitterShare to FacebookShare to Pinterest