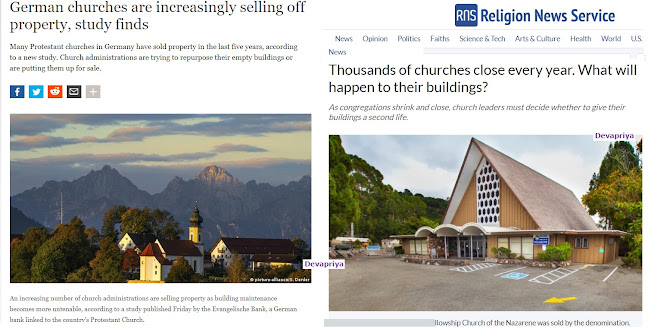 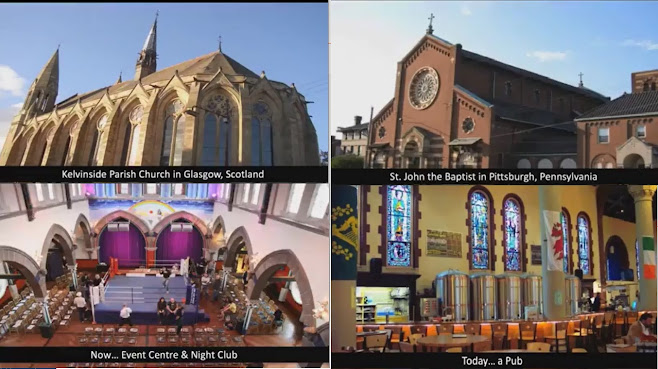 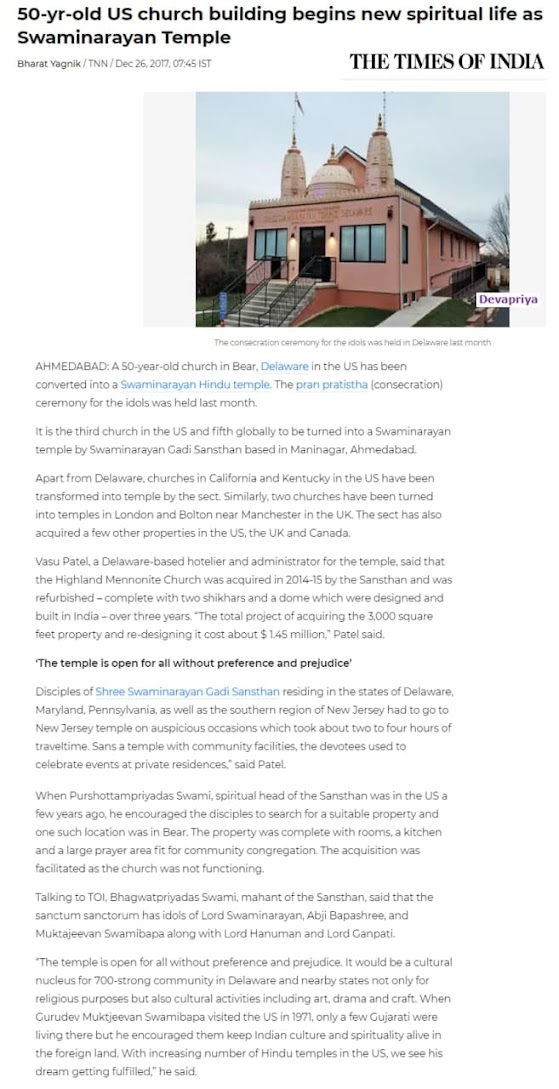 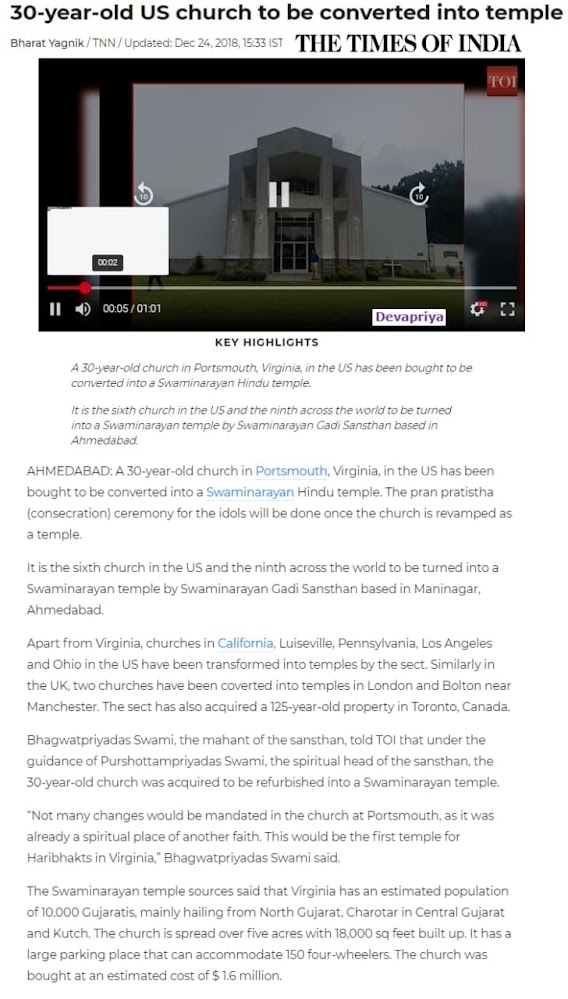 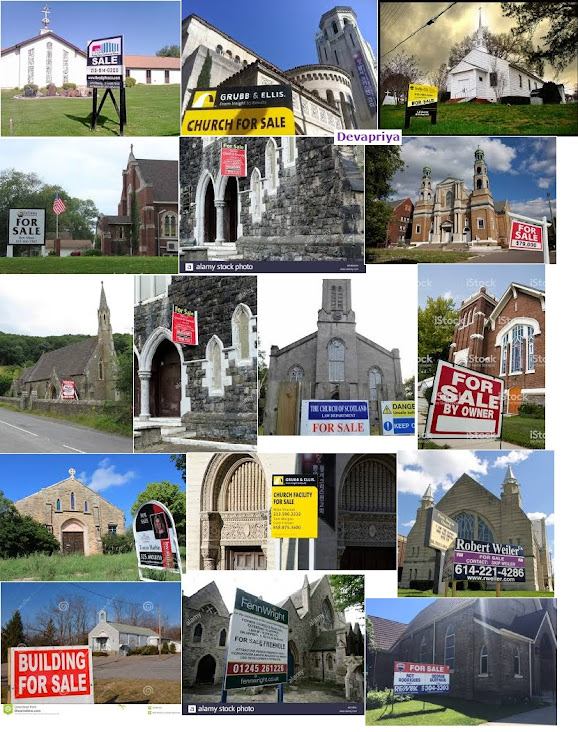 There is a long-standing argument over whether the Taj Mahal, a masterpiece of Mughal architecture in India and a topmost revenue-generating monument, was a Lord Shiva temple. Until now, several petitions have been filed with the Judiciary of India, seeking to restore the mausoleum into the previous Hindu shrine named Tejo Mahalay. Owing to the lack of evidence in the annals of mainstream Indian history, the argument has not spread out of the frying pan into the fire. However, churches are making way for temples in the United States.

A 30-year-old church in the US state of Virginia has been converted into a new Swaminarayan Temple in Chesapeake near Portsmouth, VA. The church was bought for $1.6 million in 2018 by Swaminarayan Gadi Sansthan in Ahmadabad, India. The church was an 18,000-sq-ft edifice on a sprawling plot of five acres, with a spacious parking plot for 150 four wheelers in Chesapeake.

The Shree Swaminarayan Mandir in Chesapeake, Virginia had its grand opening ceremony from July 19 to July 21. Holy prayers, devotional music, classical dance performance and hymns complemented the inauguration ceremony. A peace procession attended by Indian Americans, under the supervision of Acharya Shree Purushottampriyadasji Swamishree Maharaj, followed the inauguration of the Shree Swaminarayan Mandir in Chesapeake, VA. 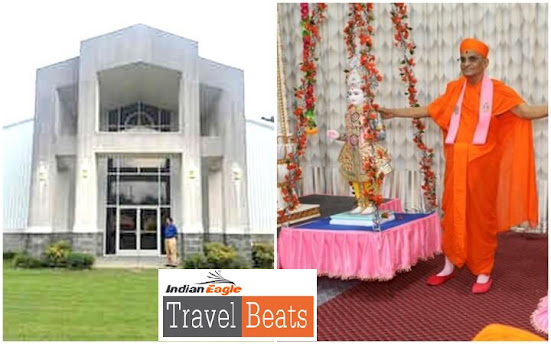 The Portsmouth church in Virginia is not the first such establishment to be converted into a temple in the United States. Churches in Los Angeles, Louisville, Pennsylvania and Ohio have been turned into Swaminarayan temples in the USA. The United Kingdom is not an exception to the conversion of churches into temples. Two churches – one in London and one in Bolton near Manchester – have made way for temples in the UK.

In 2017, a neglected church in Edison, New Jersey was acquired to make way for an Udupi Krishna temple. Though the main building of the church was not demolished, an architectural refurbishment was made to lend it the look and feel of a Hindu temple before an idol of Lord Krishna was ceremonially consecrated there. Today, the Udupi Krishna temple stands tall on the sprawling plot of 4.5 acres, which includes a parking lot for 600 cars, in Edison, New Jersey. As many as 1000 devotees could be accommodated, at a time, for prayers inside the temple. The Udupi matt authorities cited the shortage of vacant plots as the main reason for the purchase of an abandoned church to make way for a new temple.

A similar fate is awaiting many Hindu temples in North America, according to Jay Srinivasan, the admin of ‘IACUS’ group for Indian Americans on Facebook and a resident of Boston. He doubts that the day is not far when Indian American communities will be required to adopt temples in the US, just as Indian government approached corporates and celebs to adopt centuries-old monuments for regular maintenance.

He opines, “Most of the Indian American kids do not believe in temple rituals. Only a small percentage (perhaps, less than 10%) of the second-generation Indian American kids go to a temple regularly, which is not more than once a month. The remaining 90% don’t.” He said uninhibitedly, “All my 3 adult daughters have donated ZERO dollars to temples since they turned 18. Most probably, they went to the temple once in the past 12 years.”

“Most of the Hindu temples in North America are mired in debts. They are competing for donation with each other. A major source of revenue for Hindu temples in USA is new immigrants from India, including H1B workers. Added to the mounting issue are priests building their own private temples all over the country. In Boston alone, there are more than two private temples, the funds of which go to the priests who own them. Atop that, many software professionals are eating into revenues for temples by having turned to the priestly profession. They work in the IT corridor at daytime, and perform wedding rituals on weekends,” said Jay Srinivasan in no uncertain terms.

The crux of his arguments is that Indians in North America should stop building new temples in order to let the existing ones survive.

Portsmouth Swaminarayan Mandir: Here's the 6th temple converted from a church in US

The church was reportedly purchased for $1.6 million. In the US, the organisation's Swaminarayan temples have been set up in Louisville, Pennsylvania, Los Angeles and Ohio. By Nandita Natrajkumar 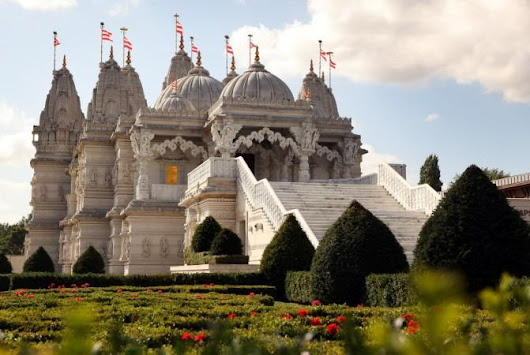 A general view of the BAPS Shri Swaminarayan Mandir Hindu temple in Wembley which is to participate in the 'Open House London' scheme later this month when it open its doors to the public, September 10, 2009, in London, England https://www.ibtimes.co.in/portsmouth-swaminarayan-mandir-all-you-need-know-about-6th-temple-converted-church-us-788744.

Gujarat-based Maninagar Shree Swaminarayan Gadi Sansthan has purchased another church in the United States to convert it into a temple. The church in Portsmouth, Virginia, was reportedly purchased for $1.6 million.

This will be the ninth temple globally and the sixth temple in the US to be converted from a church. According to The Times of India, the organisation has converted two churches in the United Kingdom in London and Bolton. They also constructed a temple in Toronto, Canada, on a 125-year-old plot of land which had previously housed a church.

In the United States, the organisation's Swaminarayan temples have
been set up in Louisville, Pennsylvania, Los Angeles and Ohio.

The current church acquired is on a five-acre plot of land and will be able to accommodate more than 150 cars in the parking lot. The consecration ceremony for the idols will be conducted after the church is converted into the temple.

Bhagwatpriyadas Swami, a priest of the Sansthan, said that not many changes will be done to the church since it was already a place of worship.

California, Louisville, Pennsylvania, Los Angeles and Ohio in the US. Two churches, one in London and another near Bolton in Manchester, UK have also been converted into Hindu temples.

The Portsmouth church will be the sixth church in the US to be converted into a Hindu temple by Swaminarayan Sansthan. It is reported that the Swaminarayan Gadi Sansthan has also acquired a 125-year-old property in Toronto, Canada to build another temple. 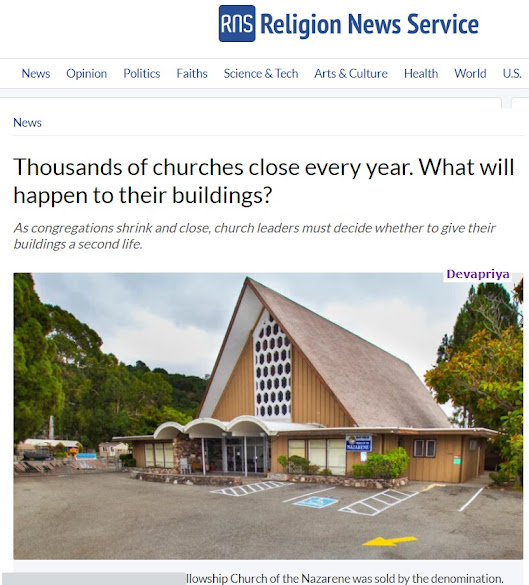 - May 24, 2022
Email ThisBlogThis!Share to TwitterShare to FacebookShare to Pinterest