In a development bound to hurt the bourgeoning business of Christian evangelicalism, it has emerged that Harvest India’s President, Bishop K Suresh Kumar is not a Christian, but a Hindu-SC. 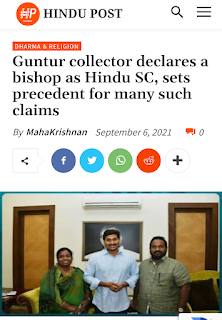 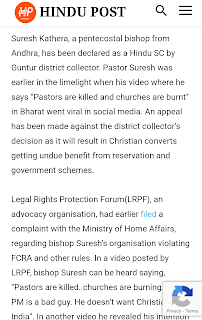 This information was shared on Twitter by the SC-ST Rights forum who are working to protect the Constitutional, Legal & Socio-Cultural Rights of the Scheduled Castes and Scheduled Tribes in India.

The District Collector of Guntur, Andhra Pradesh had reportedly confirmed that the pastor in question was not a Christian but a Scheduled Caste.

“Para 3 of the Constitution (Scheduled Castes) Order outlines that no person who professes a religion different from Hindu, Sikh or Buddhist religion shall be deemed to be a member of a Scheduled Caste.”

The Supreme Court in a 2015 ruling had said, “Once such a person ceases to be a Hindu and becomes a Christian, the social and economic disabilities arising because of Hindu religion cease and hence it is no longer necessary to give him protection and for this reason he is deemed not to belong to a scheduled caste.”

Those people from Scheduled Caste community who have converted their religion to Christianity are popularly known as ‘Crypto-Christians’ aka (Cryptos).

LRPF had earlier filed a complaint against ‘Harvest India’ and its chief functionary Suresh Kumar, for indulging in proselytization activities and violating FCRA laws.  The organization has established more than 1500 ‘community centres’ all over the country for proselytizing purposes. This complaint listed the various instances where the organization had conducted events called ‘crusades’ to induct new members to their religion as well as train religious preachers for this purpose.

Suresh Kumar who had attended the Mission Conference 2018 held at Biola University, USA three years ago, said “Right now, we are under Hindu rule. Our Prime Minister, he is a bad guy. He doesn’t want any Christians in India. He wants to make India as only Hindu country. So many pastors killed in last 5 years. Many missionaries, they send them out. There is unrest, turmoil. Pastors are killing, Churches are burning. The government is not doing anything. Brutal mentality, we are struggling. We do not know what is going happen tomorrow to Christianity in India, to Church in India but I am believing powerful god on our side. Next year we have election, please pray. I don’t want this party to come back. This guy is doing so much bad for Christianity”.

The fact of the matter is people like Bishop K Suresh Kumar who enjoy the patronage of the Andhra Pradesh state government hate Modi because his government put an end to foreign funds which were being used to convert Hindus and falsely accuse him and the Hindus of attacking Christians.

Right now many people who convert to Christianity from the SC-ST community do not forgo their privileges of enjoying quotas accorded to them.

- May 22, 2022
Email ThisBlogThis!Share to TwitterShare to FacebookShare to Pinterest